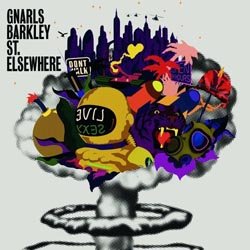 Another such producer that seems to be making the same waves is Danger Mouse, eccentric beat-maestro that came onto the scene after creating the controversial “Grey Album”, a mix incorporating the music of the Beatles’“White Album” with rhymes from Jay-Z’s “Black Album”. Though the record was more or less banned by EMI due to copyright issues, it made enough headlines and impressed enough of those who actually heard it to gain Danger Mouse some street cred and, subsequently, some work. And lately, that’s all he’s been doing.

Inheriting the production duties from Dan the Automator, Danger Mouse managed to earn himself a Grammy nomination with his work on the second Gorillaz album, “Demon Days”. Later, he worked with underground rap king, MF Doom, and created the Adult Swim-influenced “The Mouse and The Mask”. That’s just the stuff I know about. He’s everywhere these days and thus we have Gnarls Barkley, his humorously named collaboration with Cee-Lo, hip-hop veteran that made his name trading verses with Goodie Mob. “St. Elsewhere”, named for the 80s TV show, is what their union brought about.

Let me start off by saying that, up to this point, I figured soul music and R&B to be dead. The monotonous crooning and unimaginative production that passes for R&B these days is cold, boring and predictable. With the exception of Jill Scott and maybe some of Mary J. Blige’s earlier work, in mainstream America, these dime-a-dozen “singers” desecrate the very foundation by which they so proudly stand. And, sorry, R. Kelly’s career consists of nothing but sentimental schmaltz and wasted, piss-stained tape. The overall tragedy of R&B is that Marvin Gaye is in fact dead and has yet to be reborn. No matter what anyone says.

But, what drew me to “St. Elsewhere,” was that I was hearing a voice do something other than act like it was singing. It gave me chills when I first heard the title track, which is my favorite song on the album. Cee-Lo sings with a soul that sounds unmistakably like something from the old school. Without knowing what I was hearing (I’d heard the song over the PA system in the local BORDERS), I thought an old vocal had been sampled and tracked over some modern-day beats. It just shows how cynical I’ve become that I find it hard to believe that anyone can still sing this way. On the strength of that one track, I bought the album and really haven’t stopped playing it. I’m listening to it now.

Having said that, “St. Elsewhere” isn’t necessarily a soul album but a genre-infused mixture of past and present. Using hip-hip production as its unifying factor, Danger Mouse explores rock, pop, R&B, gospel, trip-hop and hip-hop, being as interchangeable as his influences probably are. Cee-Lo, being a more than capable singer and rapper, keeps up the entire time. Despite its insistence on keeping things eclectic, it succeeds in sounding like a group effort by relying on its soul elements, namely its vocalist and producer.

Six months before its release, “St. Elsewhere” had been generating a lot of buzz with its single “Crazy,” the first single to hit the top spot based on internet downloads. “Crazy” is a slickly produced crowd-pleaser with Cee-Lo sounding like a latter-day Smoky Robinson. It’s also the most reserved track on the album, which, to me, is the sign of a good album. “St. Elsewhere”, the title track, hits up the high-pitched blues of yore and then flows into a poppy cover of the Violent Femmes’ song “Gone Daddy Gone.” “Smiley Faces” taps the ministry for some spiritual guidance, while “Feng Shui” quickly details the proper do’s and don’ts of the well-publicized Eastern philosophy. Intermittent, loud drums are brought into the bluesy “ Just A Thought” while Cee-Lo admits that he “tried everything but suicide, but it’s crossed his mind.” “Transformer” goes southern hip-hop for its beats and then leads into the bass-driven and trip-hoppy “Who Cares?,” a song based on the musings of indecision and self-doubt. The one time the album tries its hand at thematic weirdness is with the horror-based “Necromancer,” a rather lackluster track that narrates the murder of a girl and the subsequent romance. It’s the only instance where the album kind of saunters off unnecessarily. It gets back on track though with an off-beat blues inspired “Storm Coming” and then the album ends with “The Last Time,” a soulful love track.

With “St. Elsewhere”, Gnarls Barkley successfully pushes hip-hop passed convention, a move that also set OUTKAST apart from the mundane, and goes straight to its influences for material. It’s exactly the sort of wake-up call hip-hop needs, considering how extraordinarily mediocre it’s become. I can only hope that, with every project he picks up, Danger Mouse continues to prosper as the music force he’s become and that Gnarls Barkley keep it really real.
hip hop

Anonymous said…
Sounds like a compelling album. I'd love to take a listen at some point. I'm also with you on the seemingly death of R&B and Soul as an actual genre, being messily eaten by hip hop and perverted into a throbbing, bass-bumping, repetitive mess bearing no semblance to the soulful and emotionally influential music of the Solid Gold and Motown era. Sad.

Anonymous said…
Another thing: Heard "Crazy" on Freefall (weekly podcast, good stuff if you're interested) and that taste more than sold me on the album. Between your review and that tidbit, I'm gonnna be picking this up, no doubt. ;)
6/01/2006 4:12 PM