Striped Stockings Make A Comeback...So Do The Dresden Dolls 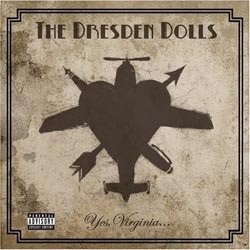 When I’d first heard the notes that spoke through Amanda Palmer’s delicate, but angry, fingers, I admit I was a bit smitten. You could just tell, listening to the reverberating keys, that she was striking them down with remarkable gusto, commanding them to do her will, forcing them to feel her pain. Well…I don’t know, is it her pain? Probably not but if she’s writing for the pained demographic then, like all good actors, she must put herself there, like a CNN cameraman in the trenches. It was an attractive pain though. And it was very well written.

I knew after first hearing the self-titled debut of The Dresden Dolls that Amanda Palmer would assume the roll of Goth-Mommy. Around the globe hundreds, maybe thousands, of misunderstood suburban female youths listened to “Girl Anachronism” and “Coin-Operated Boy” and found themselves in the arms, and at the breast, of the one woman who finally understood them all. She even went so far as to help out the teenage boys/men of the world, by grouping with her boyfriend, drummer Brian Viglione, and showing girls “they’re not all bad.” The ever-expanding legions of lost teenage girls finally have someone else to look up. And they can finally wear those black and white striped stockings that looked so cool on Samantha Mathis in Pump Up The Volume. Amanda wears them. It’s okay.

Yes, Virgina…, the follow-up to the Dolls’ first album, finds Palmer and Viglione in an interesting position. The incorporation of punk pathos and cabaret music managed to work very well for them in their debut as it was powerfully applied and accentuated Palmer’s distinct and lovely voice. Plus, a couple years ago there was nothing like The Dresden Dolls, so they enjoyed the distinction of being an original in a sea of copycats.

However, because their concept is so unique, it runs risk of burning itself out. Whereas, with their first album, they may have been taken seriously, it would be easy for them to become caricatures of themselves; loading more and more stock into their act, and less and less into their music.

Yes, Virginia… stands up to its predecessor in that the song writing, production and musicianship have grown. Palmer’s prosaic cynicism is still sharp and even more sexually charged than before. She curses a lot more this time around, too. A bonus for the easily amused. Viglione proves himself more integral, not only providing some great drum work, but also multi-tasking with the occasional bass line or guitar riff. They sound richer, possibly more confident, maybe even more evolved. But, at the same time, there’s something missing. And it could be that they’re not supposed to sound richer. Not to completely short-change the album, but it could be that the raw and unpolished energy with which they approached their debut, should’ve made a second appearance.

“Sex Changes” starts the album off with the familiar Dolls nuances, momentarily relieving any potentially skeptical listeners from the fear that their heroes may have gone astray due to success. Once the hook’s been set, the rather beautiful “Backstabber,” a light-hearted little tell-off about some “greedy fucking fit haver,” tricks the ears by sounding pleasant despite the song’s premise. “Modern Moonlight,” probably the best-written song on the album, adds some caffeine to the tempo and provides some beautifully composed piano over Viglione’s frantic stick-clicks and Palmer’s single-breath vocals. “To My Alcoholic Friends” and “Mandy Goes To Med School” take the Dolls back to their alternative Vaudeville and “Dirty Business” provides more cynical insight into the interactions between guys and dolls (no pun intended).

However, when the pace slows up, the album drags. “Delilah,” “First Orgasm,” “Me & The Minibar” and the sappy “Sing,” unfortunately lessen the Dolls’ punch to a bitch slap. In these instances, Palmer is too willing to dwell on lengthy reprisals of certain phrases or choruses, or too eager to overdo it with tired and desperate sounding climaxes. They lose passion by trying too hard and interrupt the album’s flow instead of enhancing it.

Overall, Yes, Virginia… provides proof that the Dresden Dolls are trying to be more than just a novelty act. It also suggests that, to an extent, they may have had it right the first time. Ambiguity’s a bitch but the album’s still good and for now, we are left with this promise: “you motherfuckers, you’ll sing someday.” Hopefully, they’ll continue to do so as well.
Labels: alternative