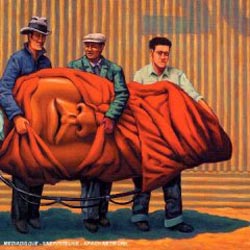 Progressive rock is always a risky genre to work with. Naturally, you have to have talent and an unfailing understanding of how to “compose” rock music. In the 70s there were a lot of performers who committed themselves to the painstaking task of making guitar/bass/drums sound refined, suitable for the for the not-so common music aficionado with a passion for Bach, Miles AND Hendrix. A tall order some might say, but a listenership emerged nonetheless, somehow adding miles of wildly perceived time signatures to the chemically addled heads of ex-hippies everywhere. The wild nuances of composers like Frank Zappa, the jazz influence of John McLaughlin & The Mahavishnu Orchestra, King Crimson’s affinity for mathematically pristine musicianship, Miles Davis’ reviled and misunderstood explorations into adding a dash of James Brown to his trumpet: Rock was growing by leaps and bounds into more than just its bare necessities.

This wasn’t everywhere of course. Backlashes to this possibly blasphemous mistreatment of rock music emerged in the form of bands like The Stooges. Plus you also had bands like Sabbath and Zeppelin that, despite experimenting musically in later albums, kept it “real” for the most part. But, the emergence of the best known of these groups, a small musical outfit from London called Yes, gave progressive rock its heroes.

Now, here’s the danger part: Rock is by nature a universal “fuck you” gesture. Mixing a “fuck you” gesture with the stiff upper-lip sophistication that comes with classical music is kind of offensive. I know that I was more than a little mortified when Metallica released the S&M album. Not that I don’t believe it can’t be done, but why drain away your music’s bare-bones rawness and intensity for the sake of indulging your own self-congratulatory misconception that your songs are somehow too good for that? I mean, there’s reinterpreting and then there’s just straight-up pretentiousness. And that’s what happened with Yes.

With The Yes Album, Fragile and Close To the Edge, (which is my personal favorite), Yes successfully expanded rock’s potential and, despite stripping away some of its rebelliousness, still managed to sound like a rock band doing some cool shit. And then you have Tales From Topographic Oceans: the pinnacle of progressive pretentiousness and self-indulgence, a long and boring exploration to nowhere. Someone should’ve told Yes “no.”

Now, what I’ve been trying to get across with the long intro, is that progressive rock has a tendency to lead the performers into situations where they feel they have to cleverly outdo themselves from album to album. The music may get better, the band may get tighter, but no matter how much you try you just can’t get into the albums these bands produce. At least not like you used to. The Mars Volta, the quintessential Yes for the now, has unfortunately found themselves in this very predicament. Since 2003s De-Loused In the Comatorium brought prog back to the new millennium, composer (for lack of a better term) Omar Rodriguez-Lopez and singer Cedric Bixler-Zavala have found themselves caught up in their own private Tales From Topographic Oceans.

Amputechture, the Volta’s third LP since Omar and Cedric disbanded At The Drive In, is almost a return to Comatorium’s refreshing spirit and songwriting. With Comatorium, the Mars Volta combined At The Drive In’s emotional heights with the signature precision of Yes and King Crimson. They also incorporated the unpolished movements perfected by bands like Sonic Youth and Fugazi. Upon listen, The Mars Volta won me over but has since become something to endure. It’s not to say that they’re a bad band, far from it. Strangely enough, I fault them for almost being too good. But their songs drip with as much uncertainty as they do with competence. Even the most amazing author needs an editor and this whirlwind of multi-directed “compositions”, (which is what they call them), sounds empty.

“Vicarious Atonement,” the opening track on Amputechture, starts things of off with a dose of straight-up Pink Floyd gloom. It’s a slow opener that was probably meant to enhance the intense drum and horn play of the 16-minute “Tetragrammaton.” With the amount of musical directions “Tetragrammaton” spreads itself around, they could’ve dissected it like a dead biology class frog and spread them all throughout the album, creating a possibly more fluid and focused collection of songs.

“Vermicide” and “Meccamputechture,” are two of the album’s moments of clarity, relying on one basic rhythm section and a reserved amount of change-ups while allowing other musical elements to craft mood and interest.

The haunting “Asilos Magdalena,” is an unexpected but welcome piece of acoustic beauty, conveying the band’s potential for sound songwriting when it isn’t trying to outdo itself. Adding a little more heft, “Viscera Eyes” does a good job of employing some King Crimson signature work but mixes an over abundance of sci-fi sound effects and brass that sort of detract from the song’s positives. Similarly, “Day of the Baphomets,” plays with some really inspired rhythm sections but they get lost in the shuffle as the song bends and twists itself into a junk art wad of digressions.

The almost 9 minute “El Ciervo Vulnerado” struggles along at a snail’s pace in an annoying haze of Cedric’s multi-tracked falsetto, sitar and feedback, and then ends the album abruptly like the producer just ran out of tape.

Overall, The Mars Volta come off like they have too much to prove, packing their songs with every trick in their book and possibly leaving themselves no ground to stand on for further releases. If they could space these musical directions throughout their albums, I think they could come up with a more comprehensive and enjoyable selection of songs that could maintain their complexity without sounding overdone. I give The Mars Volta high marks for their talents, but they need to learn some control. Having said that, Amputechture has its moments and hopefully The Mars Volta haven’t spent too many of their ideas. I’d like to see them caught up in their own private Close To The Edge.

Sincerely,
Letters From A Tapehead
progressive

Anonymous said…
although my ADD won't allow me to read this blog in its entirety, i think i get the idea. and i totally agree.

de-loused had an emotional fluidity that made the whole album seem like one song, making it pretty much impossible to get the same effect while listening to the tracks on their own.

when francis came out, i couldn't get to the record store soon enough. but like most people, i was disappointed. while it had all the same musical and technical elements (and FLEA), it just didn't make me FEEL anything.

and now... though i'm still a self-proclaimed TMV superfan, i have yet to buy or even listen to amputechture. but i will. eventually. and i will sing all the spanish lyrics as if i know what they mean. and then you can call me a hypocrite. :)
11/26/2006 12:02 PM

Thanks for reading the overblown entry, despite your ADD.

I think "Amputechture" is better than "Frances The Mute" and there are a couple songs on here worth checking out. So, being a Mars Volta fan, I'd pick it up. Frusciante makes a return.

Anonymous said…
I think the problem most people have with The Mars Volta in general is that the ideas on album are far too spread out - but for some people, that's the entire purpose of the band in the first place. Each album is distinctly different, inasmuch as each piece has a distinctly separate inspiration and "spirit" if you will. De-Loused (and to a point, it's predecessor EP Tremulant) focused on driving, punk rock influenced prog rock. Frances the Mute was about atmosphere and clash, such as the clash in dynamics between Sarcaphogi and Umbilical Syllables. When you look at the Mars Volta, you can never really say, "oh, this isn't as good as De-Loused", because in many ways...well, TMV isn't the same TMV that did De-Loused. With Amputechture, this new version of TMV are the Spanish speaking, hip gyrating latin kings of prog rock that call up equal parts of Tito Puente rythms and Robert Fripp complexity.

Honestly, it'd been so long since I wrote this up I had to reread it.

I see your point about TMV possibly reflecting versions of themselves conceptually with every album they release. My point was basically that I want them to slow down a little bit and not exhaust themselves of ideas. Granted, and you're right, it's important that TMV keep themselves interesting and not release new versions of De-Loused every time they hit the studio. However, my problem with their last two records was that they felt bogged down with too much to say, too much to do and too much (not spread out, mind you) crammed into their albums. I just think that they'd benefit from some focus.

But, it is just one man's opinion.