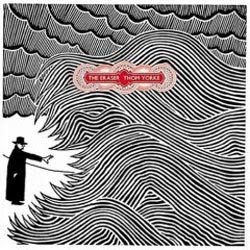 My first and favorite foray into the innovative world of Radiohead is Kid A. I’ll admit that the first time I ever heard “Creep,” I was turned off to its accessibility and its complete over-abundance of boo hoo. Add to that the fact that I kept hearing “…but I’m a creep…” ringing throughout the suburban and plastic hallways of my high school and you’d find me in complete boycott mode. It wasn’t until 2000, a relatively bleak year for music, that I decided to take a shot on Radiohead. Kid A was their latest release and it made me eat my words and thoughts as it converted me into an avid appreciator. It was technically brilliant, heartfelt and it was amazing to me how much mood was built with electronic music. It was like their synthesizers had tear ducts.

When I heard Thom Yorke’s solo album, The Eraser, I immediately understood a lot of what I’d read about it: That it’s essentially the brother, stepson, distant cousin twice removed, of Kid A. Yorke seems to have pretty much built on Kid A’s foundation, staying with the familiar company of producer Nigel Godrich and followed the mellow brick road.

Having said that, I still think The Eraser is a very good album. Granted it doesn’t really expand on Kid A’s innovation, nor does it explore any new musical highways or emotional cul-de-sacs. I personally think it would be a mistake for Yorke to abandon Radiohead for a solo career. But, the record does make me wonder:

Was Kid A really a Radiohead album, or was it Yorke’s first real solo outing?

Not that it’s a particularly interesting or earth shattering question, but one does have to wonder if the avenues taken by Radiohead during Kid A’s creation weren’t due to Yorke’s seeming fascination with sad electronic music. If nothing else, The Eraser seems to serve as a return to that direction after having strayed from that course with 2003’s Hail to the Thief. I don’t think it’s completely ridiculous to state that The Eraser could be Yorke’s second solo album and that Kid A could’ve been mostly a product of Yorke’s headspace.

But, who knows? The only thing I’m sure of is that “Black Swan” is one of the most infectious songs I’ve heard all year. It’s beautifully layered guitar picks through Yorke’s reiteration that ”this is fucked up…fucked up…” and, by the song’s end, you really never know what’s fucked up. All you know is that you listen and, with glazed eyes, you agree.

Maybe The Eraser doesn’t really do anything new. What it does do though is move you emotionally much in the same way that Kid A managed. Through the light piano strokes of the album’s title track, the desperate sorrow of Yorke’s vocal inflections through the “The Clock,” and the somewhat light-hearted and muzak-inspired synth pop of “Atoms For Peace,” Yorke still pulls together a sincerity that a lot of “sad bastard” music fails to convey. And he does so with artistry and a connection to his material. If there is any doubt about how much feeling the guy can exude, just listen to “Harrowdown Hill” and tell me you don’t feel something.

Whether I think Yorke should pursue a solo career or not is probably irrelevant. What matters here is that the guy is talented and, if he wanted to, he could probably do okay on his own. But, I really don’t think he should. The benefit to being a part of a unit as daring and unique as Radiohead is that it’ll be tough to become one-note. Though I find Yorke’s possible role as Kid A’s sole parent and his definite role as The Eraser’s sole parent equally fascinating and wonderful, his abilities don’t seem to be improving or changing. He’s raising his children the same way and, after awhile, he runs risk of only sounding competent. If Kid A broke ground, The Eraser just built on top of it. Whatever comes next, may cave the entire structure.