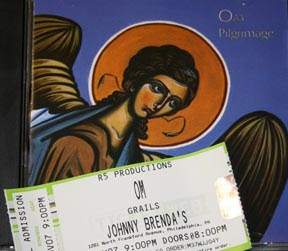 What kind of crowd could a show like this possibly draw? Answer: Metal HIPpies and metal HIPsters. So, I could guess you could say that I was at a HIP metal-type show.

The evening was this: Solo blues of the slide variety, atmospheric instrumentals and droned hypno-metal. My brother and I, after meeting up with friends for some food and beer before the show, climbed up the stairwell to see Om drummer, Chris Hakius reading what was possibly a copy of Philadelphia Weekly. I love venues like Johnny Brenda’s. When a member of the headlining act can hang out with the crowd, it’s like something special’s happening.

As far as the gang of people who faired the traffic-heavy streets of Philadelphia to see the show, I was happy to have a full beard going because that was the look of the evening.

First up was an acoustic act that went by, Randall of Nazareth. His actual name is Randall Huth, former member of Pearls & Brass and current bassist for Allentown’s own, Pissed Jeans.

Huth had the thankless task of performing solo for a crowd of loud talking motherfuckers that were mostly there for hefty wattage and beverage, and I felt kind of bad for him. He did well though, exhibiting skilled precision with every blues lick he explored and harmonizing with a very engaging vocal. Some of his jams even hit ragtime strides. He was definitely drawing from something genuine, evading the George Thorogood stigma completely.

Stepping up the noise pollution were follow-up, The Grails, an outlandishly eerie but accomplished four-piece that mixed bass-thick dub with flamenco guitar and free form jazz percussion. Bassist, William Slater, face obscured by his SEGURIDAD baseball cap, would keep his bass rhythm going with the neck while stroking keyboard notes. It was awesome to watch. In the meantime, the rhythms they hit were so strong that I kept my eyes closed most of the time so I could hear every note. They were definitely something to see live, but hearing them was almost a different part of their act. It was almost as if you could sink into their music. I was a fan by the time their set ended, picking up a CD and tshirt before I left the venue.

It was midnight when Om kicked into gear, their Wavy Gravy-looking sound-guy triple-checking every plug and sucking the patience out of an almost drained crowd of hypnotized and drunk metal geeks.

Now, keep this in mind: The Grails weren’t stingy when it came to song length. Om, in the meantime has songs that almost hit the 20-minute mark. Having said that, their set wasn’t the easiest to get through, especially after 12 on a Thursday night/Friday morning.

But, despite that, they were so fucking good.

Singer/bassist, Al Cisneros, was relentless with distortion, pulverizing aural capacity with every thick tendril of heaping boom he slapped from his strings. Hakius, lively beating his drum set to a pulp, had his head cocked into a pose of determination for most of the show. It was easy enough to move rhythmically with what they were playing, but the realization that you’d been doing so for a half-hour was sometimes hard to swallow. Their hypnotic blend of chemically fueled low end is beautifully entrancing, but also easy to get caught up in like a sonic swamp. And everyone was caught up in it, as their bodies and heads all flexed the same way.

Making my personal fanboy dreams reality, they played the entire Conference of the Birds album, throwing down with “At Giza” and then crawling into an ultra-slow version of “Flight of the Eagle.” Their actual set was three songs, but ran well over an hour.

I had just enough life in me to stick around for one encore, 11-minute ditty, “Bhimas’ Theme,” from their latest album, Pilgrimage and that was that. It wasn’t too long till last call, and I had to work in the morning.

I couldn’t hear shit when we got out to the street, so my speaking voice was probably louder than necessary. The both of us were thrilled with the show.

When we got in the car, I asked my brother what he wanted to listen to. He said, “Oh, anything’s cool. But, I can’t listen to Om for the rest of the night.”

I got home around 2:45AM and barely made it through work.

Unknown said…
Alrighty, drone metal. I need a starter kit. ok, I have a starter kit already, I need an idea of where to go, album-wise. Let's stay strictly with boris, sunn0))), sleep, om, maybe someone else on Southern Lord. Give me, in order, the next 5 drone metal albums i need to have in my life.

Let me start off by saying that my brother got me into a great deal of this stuff, so I owe him a lot as far as any drone or stoner metal I know of.

For Boris, I would start off with Pink. It's not all drone or sludge, in fact it's sort of all over the place, but they have some quality jams on there; mixing it up with garage, psych, punk rock and some sludge.

Not a big SunnO))) fan, but they collaborated with Boris last year for an album called, Altar that's pretty kick ass. Mostly atmospheric and murky, but worth checking out. Also, one of the members of SunnO))) was in a band called Goatsnake that's more of the stoner variety, but awesome. Great grooves.

As far as Sleep, who would probably qualify as more of a stoner group, definitely pick up Sleep's Holy Mountain. From what I understand, Dopesmoker is supposed to be awesome as well, though it is one hour long track. Member Matt Pike went onto High On Fire, which is another group you may want to check out. They're really good.

Sleep's rhythm section formed Om. Conference of the Birds is my definite number one and their latest, Pigrimage, is really good. I'll be posting a review of that one soon.

Another one I'll recommend is Electric Wizard, though I guess they'd also be more of a stoner band. Pick up Dopethrone: Killer low end and fantastic riffs.