- February 06, 2009
Punk rock historian Alan G. Parker has basically devoted his life to figuring out whether or not Sex Pistol bassist and punk icon Sid Vicious really killed his girlfriend, Nancy Spungen, having promised Sid’s mother, Anne Beverley, (before she also passed away due to an overdose in 1996), that he would clear her son’s name. 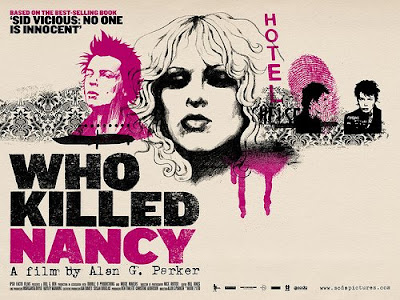 His new documentary, Who Killed Nancy?, is a new take on the mystery surrounding Spungen’s death and questions Sid’s involvement. I’m hoping it’s a more conclusive and better-researched analysis than Nick Broomfield’s documentary, Kurt & Courtney, which never really presented any substantial evidence to support Broomfield’s claim that Courtney Love had a hand in Kurt Cobain’s “murder.” But, having spent decades researching and analyzing, it’s a safe bet that Parker will have something for all the conspiracy theorists and Pistols fans to chew on.

As of today, the documentary's traveling the U.K. circuit. I haven't found any information regarding U.S. release.