“Radiant” is the Word… 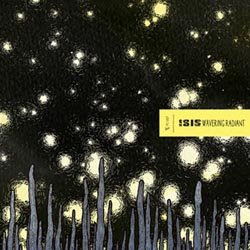 When Mastodon’s Blood Mountain reached my ears a couple years ago, the album’s potential for crossover appeal was very clear. Even in spite of its complexity and time signature heft, Blood Mountain had riffs for rock fans, speed for punk fans, mathematics for prog fans and balls behind it all. With Wavering Radiant, fifth album from post-metal progenitors, ISIS, the potential for crossover runs similarly prevalent, but only within the context or category of “music fan.”

As snobbish as that may sound, you have to lose yourself in Wavering Radiant to hear and feel the big picture. There are elements at play that suggest and recall past eras of musical exploration and attention to detail in terms of rock, metal or progressive genres, not in a “jam” sense but in a very tight and careful sculpting of the material. ISIS immerses themselves in either concentrated crescendos or prolonged demonstrations of six-string articulation, which is common as far as progressive music is typically concerned. But, sensitivity takes precedence over mathematics and ISIS knows how to convey said sensitivity while maintaining a degree of power.

Wavering Radiant, in the simplest of explanations, breathes fire at the screaming villagers and mourns the death of every casualty.

With producer Joe Barresi (Tool, Melvins, Queens of the Stone Age) at the knobs, there is a refined glow about each instrument, a discernible orchestra of precise-yet-restive energy. As “Hall of the Dead” couples its disciplined initial attack with vocalist Aaron Turner’s guttural howls, Tool guitarist Adam Jones adding depth, a midway meltdown ensues and is followed by a softened almost-interlude whose presence basically carries the song in another direction. It feels sort of contradictory, though it ably transitions to the next song, “Ghost Key,” an isolated and spatial intro giving way to calamitous outbursts.

One of Wavering Radiant’s fairly consistent characteristics is its tendency to follow rage with relative calm. “Ghost Key” works itself into a layered intermingling of reverberating guitars whose notes sort of float around each other. Turner’s harsh delivery returns before the song finishes, but does nothing to diminish the song’s splendorous musical interactions.

Album highlight “Hand of the Host,” being the longest and most tangent prone song of the album, still feels as though it’s confined to an underlying blueprint. Waves of undulating sound transition into the title track and then into “Stone to Wake a Serpent,” whose rhythm at times feels complimentary to “Hall of the Dead,” A shrieking and dissonant guitar momentarily brings the band into transcendental territory before the sinister bass line of “20 Minutes/40 Years” introduces seven minutes of hyper-percussive and sweet brutality.

“Threshold Of Transformation” ends the album boldly, a riff-heavy power jam leading into a wailing wall of noise before light strings close it out.

As compelling a listen as Wavering Radiant is, it’s also the type of album that will alienate anyone that seeks immediate gratification. Consider it as a whole, or not at all. Without a bullet to boast, or an accessible enticement for magnetizing the uninitiated, Wavering Radiant is the exploratory result of a band whose ALBUM is the focus, which is something “music fans” really appreciate these days.