A Woman A Man Walked By Noticed…

“Who would suspect me of this rapture?/And who but my black hearted love?” 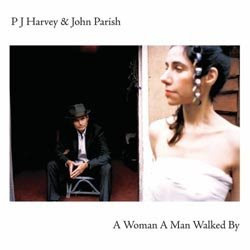 The first go-round of “Black Hearted Love,” PJ Harvey’s long-time producer/musical contributor John Parish stretches his six-string out of line with the rest of the melody like he’s attempting to sing at an octave higher than he’s capable. He reels it back before Polly Jean delivers her first few verses, a wash of seriousness dramatically intensifying what could otherwise be considered MOR. As the tonality finds its stride, Polly Jean romances the music with an impassioned magnetism that grows slowly until the song gently fades to completion.

As much as I can admit that I’ve heard objectively better albums this year, none of them have felt as alive as A Woman A Man Walked By, the second collaboration between Parish and Harvey since 1996’s Dance Hall At Louise Point. Flawed? Perhaps. Unfocused? Sure, but that’s the nature of this album, its experimental and unpolished construct lifeblood for Polly Jean’s interchangeable persona. And, likewise for Parish, whose music grows electrifying once her words find melody.

As 2007’s White Chalk opened up opportunity for the little-girl-lost Polly Jean to expand as a songwriter, having learned piano because… well, that’s what she wanted to do, A Woman A Man Walked By takes some of the pressure off her thin shoulders, content her main preoccupation and singing her task. Parish’s songwriting ambitions get the best of him, but to no extent so out of hand that Polly Jean can’t oblige.

Led Zeppelin’s “Battle Of Evermore” possibly its inspiration, “Sixteen, Fifteen, Fourteen” has Polly Jean bellowing over a folk-ish walls of acoustic strings, an eerie round of hide-n-seek in play as reverberating Link Wray chords slice through the backdrop. Schizophrenically layered chants of “There is no laughter in the garden” follow Polly Jean’s throaty vocal.

Video for “Black Hearted Love”
The often ghostly and nervous aspects of the album seem its common denominator, Polly Jean’s emotion still firmly tied to White Chalk’s wonder and sadness, (something she revisits waltz-like with “Leaving California” and with folk dirge “The Soldier”), but her maturity and world-weary voice unwavering in its observations. The most remarkable two minutes, thirty seconds of the album is the hyper-odd “The Chair,” its near techno percussion a rush of clatter amidst echoing piano chords. Polly Jean lengthily undulates over the song’s erratic backdrop, interludes of graceful swells momentarily breaking the cycle. Organ strangler “April” follows as Polly Jean chokes her best Billie Holiday, a hesitant delivery that strikes full blast for a moment of emotional realization. The pairing of “ghostly” and “nervous” is perfectly exemplified in the coupling of these two songs, almost medley-like in their song-to-song transition, somehow feeling like a continued thought.

But, as Polly Jean’s flair for the dramatic captivates, the abrupt inclusions of “A Woman A Man Walked By” and “Pig Will Not” grab your attention by the “chicken liver balls,” the latter more of an abrasive indie rock variation on Steve Albini’s recording treatment of 1993’s Rid Of Me. Her trucker tongue laced with vitriol and salt water, “A Woman A Man Walked By” is notable if for nothing other than PJ’s spewed reiterations of “I WANT HIS FUCKING ASS!” though its transition into instrumental “The Crow Knows Where All The Little Children Go” softens the blow. “Pig Will Not” carries screeching PJ into an almost Arabic tom-frenzy, the chaos mostly disappearing underneath a lonely piano number for the song’s last twenty-something seconds.

Polly Jean closes out the album whispering over church processional “Cracks In The Canvas,” mortality being its final theme. As PJ Harvey’s iconic presence still draws interest and possibly skepticism from more of the critical base, A Woman A Man Walked By stands as confirmation of where she’s been and where she may go. With Parish having been there for most of her career, it only makes sense that he’d know how to take her.

”Cracks in the canvas/
Look like roads/
That never end”