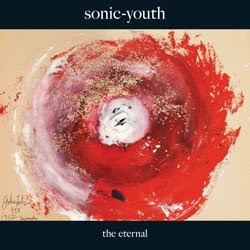 The Eternal is what you’ve come to expect from Sonic Youth, and then some.

With a noticeably enlivened sense of purpose, possibly the result of Sonic Youth’s return to the independent pantheon, The Eternal isn’t much of a deviation from the series of albums they’ve been making since 2002’s Murray Street. Though less polished and discordant at times, The Eternal’s reputation in terms of fan and critic-generated op/ed seems mostly fueled by the band’s much-publicized switchover, the excitement of inclusion back into the fold embellishing the album’s reality.

Since Murray Street, Sonic Youth have been satisfied enough just to make good albums, shifting their focus from abrasive chaos and instead finding some semblance of soft melody within their signature tone. After my first or second listen to The Eternal, I revisited Murray Street, Sonic Nurse and Rather Ripped, just so they were fresh in my mind and I could begin to understand exactly HOW Sonic Youth utilized their new freedom. And, while the energy of opener “Sacred Trickster” is a noticeable hook that the previous three records seem to lack, the subtly entrancing and more lovely characteristics of songs like “Disconnection Notice” and “Jams Run Free” feel absent this time around, that slow and melodic structure possibly sacrificed so that Sonic Youth could confirm any pre-conceived notions their fans may have had regarding their major label ex-patriotism.

But, even though I’m skeptical about how much of a “return to roots” this really is for Sonic Youth, The Eternal rocks and nothing felt better than that first wave of dissonance that bled my ears once “Anti-Orgasm” fused Thurston Moore and Lee Ranaldo’s respective six-strings into a tuneless barrage of cacophonous electrical arguments. To hear them unleash is always a thing of beauty, but even more intense is their willingness to pull you into their music. As “Anti-Orgasm” finishes its societal protest, (“Smash the moral hypocrisy/Mission control keep anarchy”), they take the last three or so minutes to let the storm fade, calm the excitement and allow you drift along in the song’s afterglow. This aspect of Sonic Youth is more engaging than any ruckus they manufacture, even if the album’s intent is to make the ruckus its primary characteristic.

With the permanent addition of ex-Pavement touring bassist, Mark Ibold, Kim Gordon’s gravelly vocal finds occupation at the forefront and backdrop of most of the album, making her voice more of a consistent element as opposed to an expected one. As “Leaky Lifeboat (For Greg Corso)” called for some lalalala’s, Gordon coaxes a pleasant enough note or two out of her otherwise coarse gullet. There are some moments though where you’re glad she’s mostly out of the picture, the electrifying “Antenna” a perfect marriage of melodious disarray and introspective passion. Thurston Moore has the perfect voice for what he does; as does Lee Ranaldo whose “What We Know” typifies his near-desperate Beat delivery.


“Calming The Snake” and “Poison Arrow” are close in jagged intensity and chaptered like one basic idea, their collective energy somewhat slowed by Gordon’s mid-tempo “Malibu Gas Station” whose final minute melts into a blast of free form confusion before gaining composure long enough to end.

Moore has a double-shot with “Thunderclap (For Bobby Pyn),” (the short-lived handle worn by Darby Crash), and “No Way,” decent enough rock songs that keep the momentum going, simplistic enough to balance out Ranaldo’s psych-inspired “Walkin Blue.” Thick low end and floating guitar strings eventually convene into a heavy-strummed noise jam and transition into Gordon’s “Massage The History,” almost ten minutes that come off like a less intense “Titanium Exposé,” her voice at times breaking up as if emotionally spent.

The Eternal is a great album: Great songs, no signs of complacency or age, no wear or tear. Their permanence as icons having had a hand in the design of modern/alternative music well understood, Sonic Youth have up until this point exhibited no need to improve upon perfection. They just continually deliver good music. Indie label, or not.