When I heard the song "Elephants," I was forced to listen. Los Angeles alt-quartet, Warpaint, possess an engaging sadness or desperation that seems to permeate their sound, which is a complex hodgepodge of post-punk, folk and psychedelia. Even trance, to some extent.

At times, the vocal passion compares atmospherically to someone like Björk, but the playing is on its own level. I don't want to say it's unique, but the jazzy percussion and light fretwork Warpaint mesh together defy the sort of lush tone and engaging harmonies that would typically draw someone to music of this sort. It's not beautiful, just captivating. 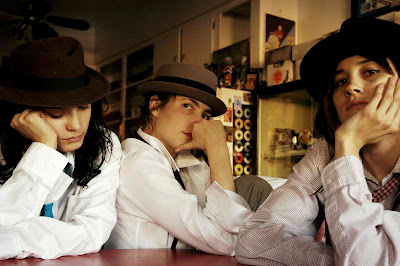 Their EP, Exquisite Corpse, is due for September release. Red Hot Chili Pepper, John Frusciante, was at the boards.