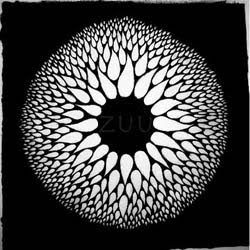 Can you take me there? Can you give me more? Can you include any more appropriate questions in your album? Questions that I ask of any album I listen to?

More than a month of listening to Everywhere, the self-released sophomore album from Cali trio, ZUU, (their drummer is credited as an “additional musician”), and I’m still objectively uncertain about my feelings toward it. At times, it’s unsettling to hear something this well done. ZUU is a really tight band, churning out nineties-stalgic sex appeal, licks and glam’d out riffs that would entice the deaf. Everywhere provides Everything: alt pop near-ballads, smooth rock n’ roll, psych atmospheric nuance, experimentalism sans distraction.

ZUU is what Sonic Youth would sound like if they really had sold out and I’m aware of how insulting that sounds. To put it another way, they have all the heart and the vision, but seem light on the grit. And, that’s why Everywhere is a daunting album to figure out: I can’t tell if it’s too clean to be credible.

As a band that’s obviously clawing their way to notoriety, yes, ZUU is deserving of praise. The opening riff of “Wasted Today” demands attention, and it’s a worthwhile experience. Droning and sneering guitar shrieks haunt the background as the rhythm cuts glass with a smooth and refined edge. “Water” introduces an almost Nuggets-era or Kinks-ish garage dynamic with syncopated beats and muted blasts of feedback, only to mutate into some healthy alt-rock chords for its chorus. “Nothing Special,” which may be my favorite track, lengthens the album’s energy with extended bass rhythm and one of those glistening guitar solos that bends like mile long serpentine. A simple rock song and it does wonders.

They get sentimentally acoustic (“Sigh”), introspective (“When I Die”), and a little overwrought (“Weaning Nettles”), taking very few missteps along the way and delivering an impressive album for being an unsigned act.

Keeping that in mind, that aspect of their identity also seems to fuel the album’s intensity and its spotlessness, leading one to believe that, at its very core, Everywhere is meant to appeal to Everyone as a showcase of the band’s capabilities and less as… art. Something as accessible as “Resolve” for instance, seems like a peace offering, flirting with easy-to-swallow pop sounds that sort of betray the rest of the band’s material. And, it’s not as if Everywhere would be considered challenging, but the songwriting is too good for pedestrian radio. In the Internet age, at least until they get signed, ZUU will be an online presence. Which is fine. At least they can call their own shots.

Point is, Everywhere is a better-than-average neo-psych alternative album from a band that’s probably better than their album demonstrates. Skill, technique, chops: yes, these are important for any band. But, there’s something to be said for viscera, blood, sweat and fatigue. ZUU either lacks the essence, or they’re unwilling to share it with us until they get Somewhere.