Shopping For Records #19: Bleach Is Twenty...

Although the realization had set in when Sub Pop claimed those numbers a year ago, twenty being the number where "modern" becomes "antique," the idea that an album like Bleach, (or a band like Nirvana), could reach the point of "classic" is humbling to someone like me. 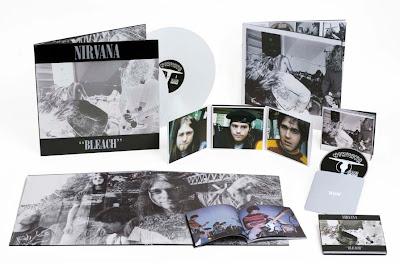 
In a few weeks, I'll be reviewing the album's reissue. As essential as the album was to my teenage years, I don't want to blow my introspective/analytical/fanboy wad on what is meant to be an announcement, so I'll say this:

November 3rd, Bleach is being reissued in honor of its twentieth year. It will be released as both a CD/double-LP with new artwork (as in "never seen before") and a live performance (as in "never heard before"). The double-LP will be available in white vinyl, as was the case when Bleach had been first pressed twenty years ago.

Since you're here, why not entertain some nostalgia and listen to "About A Girl." It's still a great song.