- November 29, 2009
I don’t think it gets any more excessive or less affordable than this ridiculous creation.

Box set artistes, Artists In Residence, have a brilliant vision when it comes to blowing albums into these extraordinary epics that don’t warrant necessity. In the case of The Pixies, as has been talked about and anticipated since the 4AD label posted the digital press release video in late April, A+R came up with the Minotaur set: A $495 product of absolute devotion that turns the band’s impact into something you can touch and smell. Artwork, multiple formats, DVD/Blu Ray concert footage and video... I would honestly sue if any additional releases, B-sides or compilations were put out by The Pixies after shelling out 5 C-notes on what should be the definitive “you will never need another Pixies album or video in your life” box set. The Minotaur set should lay the band to rest for eternity, at least until all 3,000 units are spent. After that, there’s a Deluxe Edition that’s much cheaper. 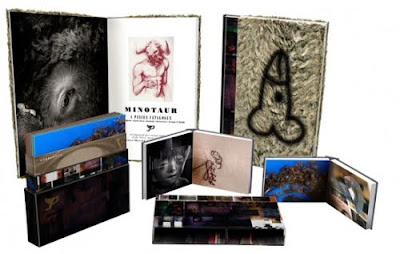