As integral as this club was to jazz music in the early to mid-20th century, The Village Vanguard is also the venue for two of my favorite John Coltrane albums, The Complete 1961 Village Vanguard Recordings and Live at the Village Vanguard Again!. It's possible that I've gone on and on about the Vanguard recordings in the past, so I'll instead focus on the club. 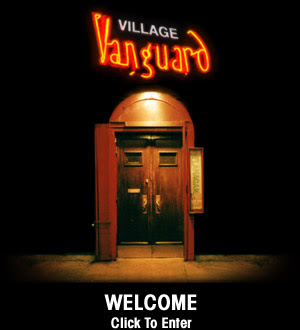 When CBGBs shut down in 2006, it was apparent that nothing in this big, dark, commercial world of ours was sacred. Art and commerce will always be at odds, needing each other in order to stay both stable and relevant, but ready to cancel each other out once the tides turn, the trends whither away, or people just stop caring. In 1977, it was about the music. In 2006, it was about the fucking rent.

The Village Vanguard is still an active club, nurturing the newbies and keeping up with the vets. Max Gordon opened the club in 1935; a basement that, according to jazz writer, Ashley Kahn, seats 123 people. Interesting number: sort of like the countdown that everyone's heard before the instruments go live and their audience brightens.

As far as popularity is concerned, jazz isn't what it once was, seen now as more of a classical art form and less of a relevant entity in terms of current popular trends. In a music environment such as ours, where hip-hop and post-CBGB mutations of rock music persist and garner most of the attention, it's interesting that the 75 year-old Vanguard still stands. Jazz music will always have appreciators, but, evidently it continues to deliver, even after Coltrane blazed trails so surreal they led to a dead end. Funny that the public's preoccupation with its ever-evolving (devolving) Top 40 hasn't affected the club and led it to the same fate that befell CBGBs. I'm thankful that some cornerstones of American genius still stand.

Sincerely,
Letters From A Tapehead
jazz john coltrane legends live recordings to whom it may interest

MilesOfTrane said…
Happy Birthday, indeed. I have some optimism for the future of jazz. Supposedly it's dying, but there are fresh voices. I'm an old bop fan but, as with rock and pop the evolutions must continue to bring new approaches -- and we must learn to accept the new pages that get turned.
2/25/2010 12:39 AM

New jazz is still being written and performed, but when I hear it it's in extreme forms like abstract metal music, or some other experimental variation. These versions have mostly maintained the abrasiveness and insanity of free jazz and hard bop, so I believe it to still be a relevant genre. But, you don't find performers like Coleman Hawkins, or Sonny Rollins, or Mingus, or Lester, or Ornette, or Trane... these guys just don't exist these days. I could be wrong, though. If they're out there, and they're not just regurgitating the greats, I hope they can enliven the genre as it was in its prime.

Thanks for your comments and thanks for reading,