In 2006, my now-wife and I were given tickets to see Tom Waits during the Orphans tour as a wedding gift from our friends, Jim and Neen. The closest Waits was coming that year to the east coast, was Louisville, Kentucky. 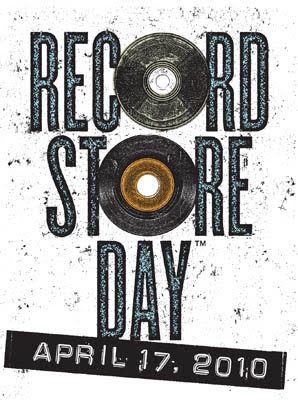 We traveled there and had only a day or two to experience Louisville before either heading to the show, or heading home, so we made the most of it. We looked into Deadhead clothing stores, a giant book mart, a hole-in-the-wall record store... It was as if every 60s radical settled into this cozy little town and made a living off of counterculture and art. It appealed to me like you wouldn’t believe, despite my allegiance to the city of Philadelphia. There was a general warmth to Louisville that resonated deeply, even though we realized every subsequent trip we might take there in the future wouldn’t compare, our first Tom Waits show to look forward to and our childless selves still able to revel in spontaneity.

The day after the show, before we were to leave, we took a drive to Ear X-Tacy, Louisville’s music superstore.

Last year, when I found out about Record Store Day, it inspired me to write an essay on the importance of the record store, their impact on the music fan and why we need to try and keep these stores afloat. The picture I had in my head when I wrote this possibly self-indulgent, self-righteous and inconsequential couple paragraphs was of a store like Ear X-Tacy. It is the store that any record enthusiast WANTS to have in their neighborhood and Louisville is lucky to have it. I entertained the idea of moving to Louisville after passing through its doors, and marveling at all its record junkie splendor. There is something amazing in its every corner, waiting to be discovered. Corny? Just true.

Around the time I visited the store, Letters From A Tapehead was maybe a month or two old. Once I was back home, I made sure there was a link to Ear X-Tacy’s site.

Since writing that essay, I’ve done my best to buy music directly from indie labels or indie record stores. Even my Amazon purchases are through affiliated merchants, Ear X-Tacy being one of them. Not to get on a soapbox, because I don’t want to be in the position of telling people how to spend their money in a rough economy, but before I knew of Record Store Day, it didn’t really occur to me how much I would miss record stores if they all shut their doors, forever replaced by cheap, downloadable files. So, I’m doing my part, albeit miniscule, to make sure my money goes somewhere it will do the most good, not just for me, but for communities that pride themselves on small businesses.

Ear X-Tacy has fallen on tough times, the economy and popularity of downloading (legally and illegally) music mostly to blame. Ear X-Tacy owner, John Timmons, held a press conference in February about the store’s financial troubles and what needs to happen to keep the store open. In the case of Louisville, Ear X-Tacy’s demise would be a detriment to the community, a significant neighborhood fixture gone.

A Facebook page was put up in an effort to build support for the store once news of Ear X-Tacy’s possible closing came to light. At the time of the press conference, Timmons mentioned that the page had 19,000 followers and stated, very directly, that if these 19,000 paid $1 a day for 1 month, he could keep the lights on. The page has since bulked up to over 31,000. Imagine if all 31,000 people bought one CD. Do you think that would keep Ear X-Tacy in operation, able to enrich its community? If anything, it would at least keep the store in operation for a couple additional months.

I don’t know if merely writing about this is going to help, but the store made enough of an impression on me that I felt the need to say something, or do something. So, I’m going to buy a CD from Ear X-Tacy. A small donation, a tiny action, but a coalition of such actions could make a difference. And, after all, when you dispense with the limited edition releases and live performances, this is what Record Store Day is all about.

Below, are videos of the press conference.

Sincerely,
Letters From A Tapehead
Labels: record store day to whom it may interest you hoped it wouldn't happen