Did I Give You Guys “Skyward Housing?” 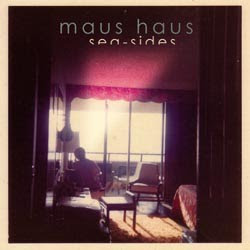 Last year, I heard and fell in love with Lark Marvels, the debut album from San Francisco synth rock sextet, Maus Haus. As the band laid into its synthesized persona, a sound that strangely intellectualized its garage weirdness with a dose of science fiction, Lark Marvels seemed a new phase in the Nuggets continuum, one that took its San Franciscan homeland’s tradition and inspiration and brought the sound some digital awareness.

With Sea-Sides, the band’s latest EP, Maus Haus doesn’t necessarily expand or evolve their sound, but they maintain their distinct brand of invention. “Winter” strides like a modernized Zombies track, heavy on vocal melodies and arrangements that evoke polite psychedelia. “Zig Zag” is enlivened by prancing keyboard strokes and rolling percussion that sets up the bouncing syncopation of “Skyward Housing,” a song whose title seems to exemplify the sort of imagery their sounds suggest.

They dangerously tread Animal Collective’s undulating waters with “Sunshine,” the vocal harmonies and generated electronic expanse almost an homage to the Collective’s most recent soundscapes. “Sneaky Feelings” is a melancholy marriage of fuzz, tap and hum that transitions into an epic midsection, leaving the song’s remaining minutes feeling orchestral.

Though Sea-Sides is essentially a five-song enticement meant to carry you to the next release, it’s worth the attention. Still an eccentric and imaginative unit, Maus Haus continues to mesh modernism with rock n’ roll ancestry, offering new experiences in electronic-composition and giving us a glimpse at life with “skyward housing.”