What I Heard This Morning: Paul A. Rosales

- June 29, 2010
Another in a series of self-recorders that seem to be making some interesting musical strides of late, (Ariel Pink and Wavves garnering many headlines lately), Paul A. Rosales will be releasing his debut album, Wonder Wheel I, on July 27th. His new single, “Crimes,” is now available on 7” through Care in the Community Recordings. 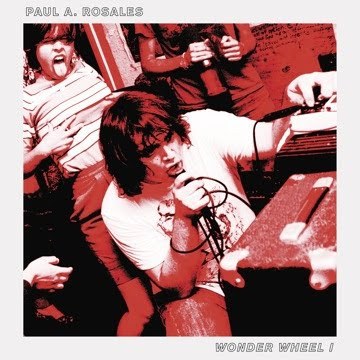 “Crimes” is a mostly mellow rock track, Rosales’ voice steeped in stretched layers of reverb. The bass line reminds me of some low rent variation of “White Wedding,” though the song itself is rich in inexpensive lo-fi and very loose in terms of composition.

Here are some details on the young Rosales:

When Paul A. Rosales isn't busy with college, he's helping produce tracks for bands like LA lo-fi female duo Pearl Harbor (Mexican Summer), performing in his hometown of Los Angeles, and coming to the East Coast to collaborate with the father of home & tape recording, R Stevie Moore. In addition to all that, Rosales is also writing songs as Wonder Wheel, his most recent and widely known moniker which has given this, his first, commercial release via London/NY's Care In the Community Recordings its title.

In a 2008 recording manifesto, Rosales notes influences from Schoenberg to Eno, however it's the electronic pop of 50s British producer Joe Meek that is most recognizable in the hurried pop gems of Wonder Wheel I. It may seem oxymoronic to speak of lo-fi music being progressive, but there's a continual inventiveness beneath the heavy echo and distortion of the 12 very different songs on Wonder Wheel I that either exemplify genres when Rosales works within them, or that otherwise begin to carve out what can only be described as new ones. But underscoring this unique sound is a strong pop sensibility that brings a familiarity and warmth that perhaps marks Rosales out from the burgeoning scene from which he's emerged.

Although barely in his 20s Rosales is already a seasoned and charismatic performer and has recently moved from a performance that put his solo vocals and tape effects front and center, to a slightly more expansive performance establishing a band for a fuller live effect. He is making his first solo trip to the UK this June as part of an Upset the Rhythm night also featuring Ganglians in order to promote his 7" single, the loose high-tempo synth groove-driven "Crimes" which is an excellent introduction to the Rosales cosmology. That track also kicks off the journey that is Wonder Wheel I.

Sincerely,
Letters From A Tapehead
lo-fi upcoming releases what i heard this morning