- July 10, 2010
Inasmuch as I can understand and appreciate the "phasing out" of a format, the CD's passing isn't going to happen overnight. With new albums, I do see the need to begin establishing the options: the MP3 in all its lame (albeit portable) permutations and vinyl for the rest of us that give a shit about what we're listening to. I don't agree that ridding the world of CDs is the best thing, but it's difficult to argue with the "green" movement. It's plastics: a lot of which has had the misfortune of forever carrying timely, disposable music. But, unlike the sounds that we can forget if we choose to, these wasted albums are forever heaped in landfills. For the sake of the environment, maybe it is better the CD disappear. 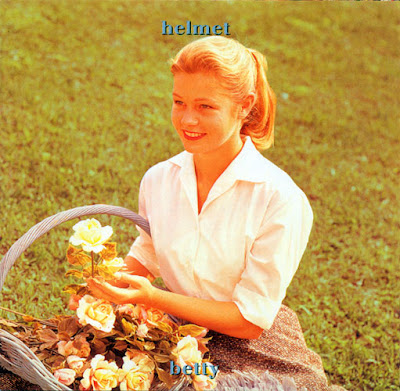 However, in terms of reissues, I can't fathom the idea of forgoing a physical option as these albums, which are sacred to some of us, once had shape and presence.

Helmet reissued their third album, 1994's Betty, as a digital-only release with some extras. As an album that shaped a portion of my teenage years, the idea of Betty's "reissuing" in this way is lazy and sort of annoying, a rather complacent rehash of a fairly underrated and important album of the 90s.

Its primal mathematics and metallic jazz, admittedly, sowed the seeds of what was later to become a rather bleak era for music in the late nineties, accessible nü-meddle whose hype even caught my attention and admiration for a few years before I learned better. But, Helmet had a unique style that these band's couldn't match, an off-beat candor that was rhythmically chaotic though calculatedly honest and direct. Even with lyrics as nonsensical as Page Hamilton's, the severity of the music, (Henry Bogdan's thick serpentine of bass rhythm and especially John Stanier's kick drum), was enough to excuse all of that.


Betty was the follow-up to its predecessor, Meantime, whose success came about thanks to the music industry's need to find the next Nirvana. As the need for the next big thing catapulted Helmet to some level of prominence, it also became a cross to the bear in the new millennium. Their sound had essentially been hijacked and diluted by all the Linkin Parks and Puddle of Mudds and the other various copycats and nü metal sweeteners, so 2004's comeback album, Size Matters, seemed another spoke in the nü cycle, the victim of a heavily played out idea of how "loud" was supposed to sound. Their follow up, 2006's Monochrome, improved things, though, so I have hopes that this year's Seeing Eye Dog will continue an upward shift for Hamilton and Co.

For now though, Betty is one of those life-altering moments in time that will forever seem visceral to me, a moment deserving of more than an online tossed salad of songs that won't benefit from a compressed sound format. The hook for me was "I Know," an annihilating series of notes that bolstered the band's rep in my mind and solidified my admiration for them seconds into the track. I always get hyped up with this song, especially with that midway onslaught of attack between guitarist Rob Echeverria (who later defected to Biohazard), Bodgan and Stanier while Hamilton choked lengthy exhalations from his frets, making his guitar almost sing under extreme duress.

Aside from Hamilton, not the real players. And, you can tell

Come on, guys, how about a real reissue? Have some fucking respect. This stuff still matters to some of us and I don't necessarily feel we deserve to have our cherished relics devalued just because the Internet gives you the option.