- September 03, 2010
Ever heard of a guy named, Stephen Friedland? If you have, then you know the story behind Brute Force, which was the name Friedland used to record his 1967 album, I, Brute Force — Confections Of Love. 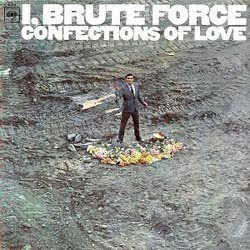 This album is being reissued in October by Bar-None Records, having been out of print for over forty years. I’ve never heard the album, but it is a highly regarded, apparently underrated and obviously obscure thanks to its lack of circulation.

The big point of interest with the album, though, is “The King Of Fuh,” which is being included in the I, Brute Force reissue as a bonus track. “The King Of Fuh” caught the attention of John Lennon and George Harrison, both of whom issued the song as a single in 1969 via Apple Records. Capitol and EMI refused to distribute the single thanks to Frieland’s tale of the “Fuh King,” so 2,000 copies were released independently by Apple as “Apple 8.” Needless to say, the track is obscure, but I did find a YouTube clip of the single and its B-side “Nobody Knows.”

Brute Force has a blog if you’re interested in him, his music, or you want any additional information on “The King Of Fuh” and the reissue.