- October 25, 2010
The Beastie Boys’ Hot Sauce Committee Part 2 will release in 2011 according to a confusing press release. See if you can make sense of it.

Via the Beastie Boys’ newsletter: 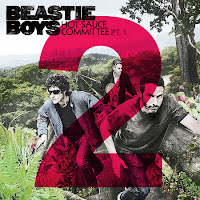 In what can only be described as a bizarre coincidence, following an exhaustive re-sequence marathon, Beastie Boys have verified that their new Hot Sauce Committee Part 2 will be comprised of the same 16 tracks originally slated for inclusion on Hot Sauce Committee Part 1. The record (part 2 that is) will be released as planned in spring 2011 on Capitol.

"I know it's weird and confusing, but at least we can say unequivocally that Hot Sauce Committee Part 2 is coming out on time, which is more than I can say about Part 1, and really is all that matters in the end." says Adam "MCA" Yauch. "We just kept working and working on various sequences for part 2, and after a year and half of spending days on end in the sequencing room trying out every possible combination, it finally became clear that this was the only way to make it work. Strange but true, the final sequence for Hot Sauce Committee Part 2 works best with all its songs replaced by the 16 tracks we originally had lined up in pretty much the same order we had them in for Hot Sauce Committee Part 1. So we've come full circle."