Chronological Distaste: An Introduction to Disgrace and Out Of The Blue Teaches Boys About Keyboard Love...

Granted, sometimes it’s just a matter of having been young and caught up in an era. Nick Rocks and MTV informed my musical decisions in then modern suburban America while my father’s record collection didn’t really reach past the year I was born, (which is 1976 if you must know). We all start somewhere and we learn from our mistakes. As much as I would like to state for the record that The Velvet Underground & Nico was something I picked up on when I was 7, this is simply not true. So let’s, as the Minor Threat song instructs, look back and laugh.

Debbie Gibson
Out of the Blue
Atlantic
Released: 8.18.87

“Red Hot” still gets in my head from time to time, but only the part where Debbie Gibson sings, “Red hot! Red hot!/Baby, it’s red hot! Red hot!/I need your luhh-uh-uvvvv...” 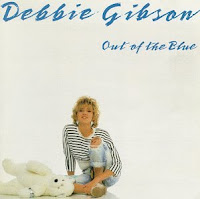 I wasn’t even 11 yet, though I was getting into the idea of collecting music. Up to this point, most of the music I owned was recorded onto mix tapes. I was either recording music off the radio or off my parents’ television set as I leaned my cassette recorder against the speaker during music videos. Strangely enough, I was very much into Def Leppard at this point in my life. Hysteria wound up a milestone in my musical evolution and its subsequent supporting tour led to my second concert going experience.

But, that’s for another time.

Debbie Gibson was maybe my first pop star crush, so even for a Catholic school child of 10 whose weekend diet consisted of Headbanger’s Ball and Monkees LPs, I could, for Debbie, get my head around bubblegum residue like “Foolish Beat” or “Shake Your Love.” I cringe when I think of the time I invested on Out of the Blue, which is one of the first cassette tapes I ever bought with my own money. I think of the trash cans I emptied, the countertops I wiped, the carpets I vacuumed... Just to earn enough to buy Out of the Blue and listen to it, possibly out of spite for having made such an investment.

No, I liked it, but mostly because I liked her. Plus, Tiffany’s Tiffany was out around the same time and pitting pop originals against pop covers almost seemed like a way to propel myself into the upper echelon of snob’dom, such as it was for my clueless and sheltered ass.

I guess, in a way, there’s something to be said for sucking on behalf of YOUR art as opposed to somebody else’s, which at least offers Gibson a leg up on ‘97 popsters like Britney Spears and Christina Aguilera. Out of the Blue will never stand as anything other than a relic of 80s glam and plasticity, but at least Gibson attempted to inform tastes, even if they did cater to the mainstream’s palette.

The tape is lost, obviously, as is my fondness for its composer. I was onto other things by the time Electric Youth came out. Not better things, but definitely other things.

Sincerely,
Letters From A Tapehead
80s chronological distaste pop to whom it may interest

Unknown said…
Nice writing Sean. My first musical purchase was The Immaculate collection by Madonna and I still have it.
10/23/2010 11:34 AM

Thanks for the kind words. I plan on continuing with this series and it's probably going to get more and more embarrassing as I come up with new details.