Primus Sailing The Seas of Oakland for New Year's...

- October 23, 2010
If you live in Oakland, you have the chance to be very fortunate and see Primus play Sailing The Seas Of Cheese in its entirety. 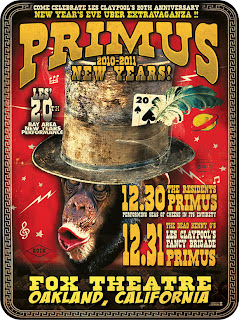 Twenty years... wow, time flies when you're having fudge. In 2000 I told myself, "I'm done with these New Year's Eve shows. They're in the middle of the holidays, all my relatives are out and I have to rehearse up a new theme every year; it's a pain in my ass." Then Michael Bailey offered me a solo show at the Fillmore for the 2000-2001 New Year's Eve. So I said, "Ok", thus spawning another decade of New Year's Extravaganza's. Now we are looking at the 2010-2011 show which will be my 20th in a row. (We actually played the Night Break club in San Francisco in 1988 on NYE but then skipped the next year.) For this we will need to blow it out and pull all the stops. Two nights at the Fox should do it and playing multiple sets with Primus and my band of all-stars (The Fancy Brigade) coupled with a dream bill of mine, which is being paired with The Residents, should just about do it. Be prepared to be dazzled, amazed and surprised beyond comprehension. - Les Claypool

12/30 – Oakland, CA – Fox Theatre – The Residents, Performing Seas of Cheese in its entirety

Find the latest updates at: www.primusville.com

Sincerely,
Letters From A Tapehead
90s alternative perfect records to whom it may interest upcoming tours