- November 11, 2010
The White Stripes have more or less been off the radar since they released 2007’s Icky Thump and since canceling a series of live shows due to Meg White's anxiety, which may or may not have had something to with the fact that she DIDN’T have sex on video. Jack White, in the meantime, has put out a second Raconteurs album and two Dead Weather albums.

But, seeing as though they did gather some attention this year with the Under Great White Northern Lights documentary, the renewal of pepperminty attention was cause enough to off load these super expensive “Merchandise Collections,” which are admittedly ambitious and kind of cool. 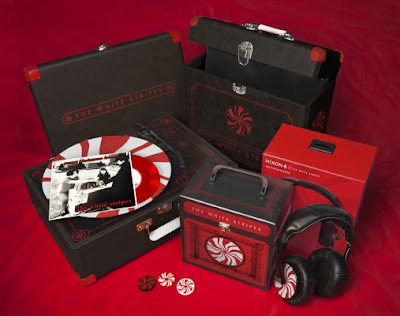 Enabling the spender to play this set, the White Stripes Merchandise Collection comes equipped with a portable record player, which is quite possibly where the bulk of the $499 retail is spent. The entire set is vinyl, which makes sense considering the Stripes’ allegiance to lo-fidelity and vintage sound. There are even vinyl boxes to house your very precious 7" and 12" Stripes albums.

Check out the details at Third Man Records.