What I Heard This Morning: Chris Schlarb 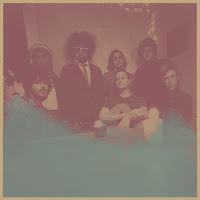 I have to hand it to Asthmatic Kitty. As an indie label thankfully tied to a rock darling like Sufjan Stevens, you’d think it would be in AK’s best interest to keep their roster full of similarly toned copycats. And yet, they branch out and proudly provide a home for an artist like Chris Schlarb who decides, “Yes, I need twenty-nine musicians for my next album.”

Chris Schlarb's "I Can Live Forever If I Slowly Die" really shouldn't shock me THAT much. Since commissioning sound artists and musicians to explore soundtrack music, Asthmatic Kitty’s backing of a jazz project seems like further confirmation that the label recognizes and respects independent music and not just “indie” music. Schlarb composes light free form backing, “In A Silent Way”-styled trumpeting and choral harmonies. I’ve only heard this excerpted version of the song, but as a teaser, it goes a long way.

Below is information on Schlarb’s upcoming album, Psychic Temple.

I Can Live Forever If I Slowly Die (Excerpt) by schlarb

An astounding work of passion and patience over one thousand hours in the making, Long Beach musician/composer Chris Schlarb bestows his latest musical vision, Psychic Temple, onto the world. Known for his work as half of the hypnotic, jazz/drone duo, I Heart Lung, Schlarb's latest work expands wildly in new directions, incorporating wordless vocal choirs, string quartets and horn sections into his 29-member ensemble.

Inspired by the rhythmic pulse of microhouse, and the melodic vocabulary of jazz and folk music, Psychic Temple is a deeply considered meditation on beauty. Recording began in January of 2009 and over the next nineteen months Schlarb collaborated with twenty-eight musicians (including four bassists, three drummers and six vocalists) to build Psychic Temple.

On November 23rd, Asthmatic Kitty will digitally release Psychic Temple. Schlarb has just launched a Kickstarter campaign in which his label Sounds Are Active will print 500 LPs of the album, hand-numbered and signed. For all pledges of $10 or more, folks will receive the digital download of the album. Some of the prizes you can will at different levels of donation include hand-written sheet music, two hours at Sounds Are Active Studios, Electro-Harmonix equipment used on the record, a song written for you, a chance for Chris Schlarb to produce your record, and even having him fly anywhere in the US and perform Psychic Temple (and even take requests). Check it all out HERE.

Praise for his last record Twilight and Ghost Stories and I Heart Lung...

"Twilight is jazz in the same sense as the genre-smashing stuff the Art Ensemble of Chicago played from the late '60s through the early '80s. Which is to say that it both epitomizes and transcends the genre."
-Tiny Mix Tapes

"Top 5 Jazz Album of 2008. After recording a series of Brian Eno-inspired drones, I Heart Lung enlisted additional contributions from guitarist Nels Cline, trumpeter Kris Tiner, field recorder Aaron Ximm and many more. I Heart Lung creates an organic world, which ties all these disparate elements into a sound that moves together."
-NPR

"They shift, they stretch, they bend, they change form, they break rules, all in search of what feels right. And when they find what they're looking for, they move on to the next thing."
-Pitchfork Media

Sincerely,
Letters From A Tapehead
jazz single upcoming release what i heard this morning