What I Heard This Morning: Mike Watt & The Missingmen

"hyphenated-man" is the name of my third opera, "contemplating the engine room" (1997) being the first one and "the secondman's middle stand" (2004) being the second. I expressly put together the missingmen (on guitar: tom watson and on drums: raul morales) for this proj a couple of years ago and now w/the mastering by john golden (august 19, 2010), I am so glad to say it has now been realized. it's first release was october 6, 2010 in japan on parabolica records. 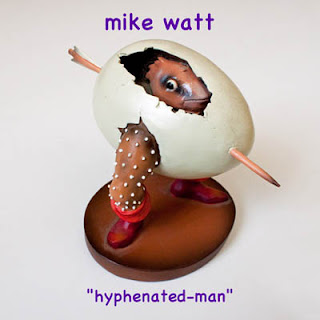 whereas "...engine room" dealt w/my pop's life in the navy as a metaphor for the story of the minutemen and "...middle stand" was a parallel to dante's "comedia" dealing w/an illness that almost killed me in 2000, this third opera is quite different in that it has no standard narrative (libretto!) meaning no regular beginning-middle-end and is as it were "simultaneous" in the way a mirror from just inside my head - right in this middle-age moment of mine - was then shattered into thirty pieces and then each piece stuffed in the head to show a piece of my state of mind (or out-of-mind) as of now. "thirty tunes?" yes, they're little ones... actually they're "thirty parts" of one big tune. back in 2005, too heavy to really hear minutemen stuff for many years, I had to face myself and get the nerve up to hear it again when I agreed to let keith scheiron and tim irwin make the "we jam econo" documentary (many thanks to them and all who helped out on that). I even did a few gigs w/george hurley w/us as a duet doing some of the old tunes and it was trippy for me, like I was digging on how "econo" those tiny tunes were - no filler, right to point and distilled down to the bare nada. also, a big influence was those little creatures in those old hieronymus bosch paintings - I read a theory about them maybe being visualizations of proverbs or aphorisms and me, not knowing much about sixteenth century dutch/flemish culture, made up my own meanings! the main parallel I saw w/the minutemen was how many little trips could roll up into one big one. the other thing that came into play was this idea of dorothy (from that "the wizard of oz" movie) kind of tripping on what men do to "be" men - me, taking that perspective on the story and not caring whether mr baum - or the people who adapted his work for that film - intended it or not (though no disrespect to him or the others). so I piled those trips into one pile and that's where this third opera came from.


oh, it was kind of trippy how this piece was actually made. I wrote all thirty parts on one of d. boon's telecaster - the black one he got in kent, ohio in 1984. now I'm not a very good guitarist but tom watson was quite the righteous man in his patience and determination to take the palsy demos I gave him and bring them to the piece. he'd join me a my prac pad w/his guitar and me w/d. boon's and while clearing up uncertainties by actually showing him where my fingers were on the neck, we both would play along and I would have raul try out different drum things so I could piece his parts together. I wanted him to stretch from what he was used to but still have it be natural for him. the main thing I was trying to do was get what I considered an "interesting conversation" between them musically. then in the middle of the "prac'n the 3rd opera" missingmen tour (trippy cuz not once in that whole tour did we play and 3rd opera songs for anyone but I would relentlessly pound the piece into tom and raul's head every day while we were driving in the boat!), we took three days off in the middle (may 3 - 5, 2009) and put into studio g in brooklyn, ny w/one of my bass heroes tony maimone to record just the gutar and drums - no bass or spiel at all. in fact, tom and raul never heard one word or bass note 'till I spent a week doing that stuff in at the g w/tony during june of 2010 and then still not yet 'til he had did the final mix a month and a half after that while I was out on tour w/the stooges. damn, what would this piece be w/out bass brother tony! big respect, same for tom and raul. it might've came out of my head but these dear cats helped me big time realize it. I am truly grateful to them, truly.

Sincerely,
Letters From A Tapehead
Labels: mike watt upcoming release video what i heard this morning