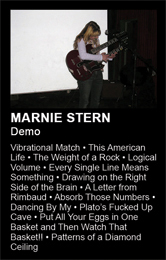 The release is being issued by Dog Daze Tapes as DD-002 along with a digital download.  Hopefully, SOME of you still have tape decks, because I’ve been seeing a lot of cassette-only releases having surfaced over the last year or so. Apparently, there’s still some love left for the format.  The tape is $7.50.

dog daze tapes said…
nice post! glad you're interested in the tape. we were thinking of calling it "in advance of the broken arm (demo version)" but i thought it would be too confusing and didn't want to deal with people who want the krs album accidently buying the tape and vice versa.

ALSO the cassette will be available digitally from itunes, amazon.com, etc. on tuesday for people that don't have tape decks.

Thanks for getting in touch.

Honestly, my comments about the name of the release were purely tongue-n-cheek. I could see not wanting to confuse people with something like this.

Glad you enjoyed the post and I hope you have a great weekend. I'll be following your blog so I can keep track of your releases.