- January 11, 2011
Back in November, I mentioned that a reissue of Neurosis' Souls At Zero was in the works.  Well, more information on the reissue is available, along with some news about some live performances.  All news courtesy of Earsplit PR. 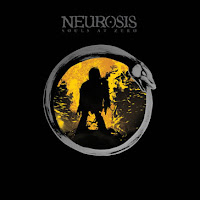 For Oakland, California’s NEUROSIS, their entire catalog can be considered brilliant not only for its sonic merit but also for its need to wander from the beaten path. Rare is it that a band can make you feel the cold and hard texture of concrete while allowing you to smell the growing vine in the confines of one song. Perhaps this is the reason why so many have looked to and borrowed from their table.

NEUROSIS is pure emotion, in every positive or negative form. Souls At Zero is NEUROSIS' first flash of true brilliance. Never before were they able to show their passions and exploratory needs so eloquently, while still keeping their musical hearth concussive and visceral. Synthesizers, acoustic guitars and other non-traditional instruments came into play, as did tribal chants and an ethereal smokescreen which enabled the band to shapeshift from one musical being to another. NEUROSIS' expansion into the uncompromising and groundbreaking act that they are now began here, making the importance of Souls At Zero larger than even the band could ever know at the time. This album is the glint that never leaves your aural vision, no matter how hard you try to escape it. A catastrophic tinnitus that you hope won't go away.

Neurot Recordings is proud to reissue this perpetual flame of a release while celebrating the band's 25 years of brilliance. With demo version additions of “Zero” and the title track along with a bonus live cut “Cleanse III”, this updated release is the perfect portal to witness the development of underground music’s titan force. Artwork by the revered Josh Graham completes an awesome package worthy of timeless worship, which Neurot will officially release on February 15th, 2011. View the redesigned cover art and more at this location.

Following NEUROSIS' recent live appearances in the UK in early December, as well as their year-end double-header in Seattle last week, the band will invade the Bay Area next week for two shows in San Francisco; their first shows in their native stomping grounds since 2008! NEUROSIS will also headline the first night of this year's installment of the Maryland Death Fest in May, with support from Corrosion Of Conformity, Exhumed, Aura Noir, Marduk, Goatsnake and countless more that night.