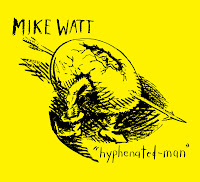 Mike Watt’s Hyphenated-Man is just about released. Artist Norton Wisdom, decided to film himself illustrating each of the album’s thirty song titles, which are based upon characters as specifically named as “Beak-Holding-Letter-Man” and “Boot-Wearing-Fish Man.” The video is rather hypnotic.