Sunday, February 13th, Henry Rollins turned 50. A hero of my youth, significant in sight, sound and influence, Rollins is essentially responsible for much of my musical upbringing, his aural affront an epiphany to my teenaged ears and on into my early thirties where I still find satisfying brutality in the grooves of Black Flag and Rollins Band. 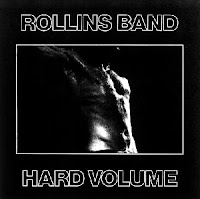 Before The End Of Silence sort of broke Rollins Band out as part of the 90s alterna-cash crop, the band had put out an album called Hard Volume, which is a blues-driven sonic scream that really doesn’t get enough credit. I mean, you wish to hear albums this pure in your lifetime: Rollins’ calamitous outrage awakening your mind’s defenses, the band itself proving their chops with this punk-infused brand of King Crimson-ish progression, blue-rock precision and metallic heft. At some point, I’d like to revisit Hard Volume as it is an under-appreciated chapter in the life of an altogether under-appreciated band. I know I’ve written a little about it before, but it’s a favorite that I always come back to.

In the meantime, as yesterday was Valentine’s Day, I thought posting the track, “Love Song,” would be a good way to commemorate Hank’s fifth decade while acknowledging the passion of the holiday. You don’t really get more passionate than, “I want you/I hate you.”