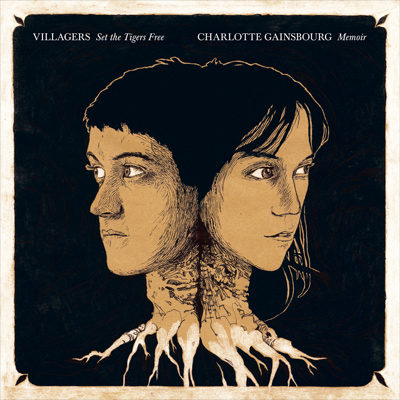 Last Autumn, Charlotte Gainsbourg approached Conor O'Brien (aka Villagers) to compose a song for her. The result is 'Memoir', a song which Conor wrote between soundchecks and radio sessions on his week-long tour of the Midwest last September. The track was completed after working through the night in a Chicago hotel room.

Charlotte loved it and they recorded it together the following week at Studio Ferber in Paris, with Conor co-producing alongside Renaud Letang (producer of Feist, Jamie Lidell, Manu Chao).

The split 7" features the sumptuous 'Set the Tigers Free' by Villagers as well as Charlotte's beautiful rendition of 'Memoir', all wrapped up in some striking artwork by Conor and sold exclusively for Record Store Day.

The track will also feature on Charlotte Gainsbourg's Live and Unreleased Album, which will follow later this year.

After exploding onto the scene June of last year, Ripple Music continues its path as one of the fastest growing Independent Record Labels in America.

Following a year that saw the signing and releasing of new and vintage material from Stone Axe, Poobah, JPT Scare Band, Fen, Modern Day Moonshine, Mighty High, Grand Atlantic, Sky Parade, and Kevin Beadles, Ripple Music followed up by adding such bands as Mos Generator, Iron Claw, Grifter, and Tripdavon to their roster, and joining with Small Stone Records to release new material from Sun Gods in Exile. And special projects are in the works for more Poobah, Stone Axe, JPT Scare Band, and special releases from this years Fuzzapalooza.

Now, Ripple Music will celebrate Records Store Day with their own Ripple Store Day. As a thank you to their fans and supporters who’ve allowed Ripple to unleash all this musical mayhem onto the world, Ripple will be applying special 15% discounts on everything ordered from the Ripple Store from April 15 to April 17th.

And when Ripple Music says “discount on everything” they mean everthing, including special collectors packages of Stone Axe I deluxe CD/DVD, vinyl and 7” single, the new Heavy Ripples double 7” package, and the best-selling Poobah Let Me In double 12” LP. In the store, you can also find classic non-Ripple albums from Ripple artists Stone Axe, Mos Generator, and JPT Scare Band. All of which will get the additional RSD discount.

It’s all just Ripple’s way of saying thank you for allowing them to keep doing what they love, bringing the best music your way and putting the guts back into rock and roll!