Chronological Distaste: "What Do We Think About Hammer?" 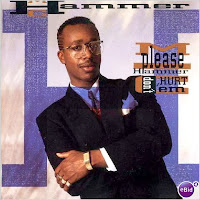 I can boast the following: The first rap albums I'd ever heard were the Beastie Boys' License To Ill and Public Enemy's Yo! Bumrush The Show.

The aforementioned boast is canceled out by this admission: The first rap album I ever paid for, was M.C. Hammer's Please Hammer, Don't Hurt 'Em.

I was pulled from Catholic school after sixth grade. While I don't want to enact the cliché of misunderstood youth reluctant to completely buy into parishioners' dogma, I'll instead say that I have a liberal mother and that my inquiring mind, lack of attention and penchant for doodling in the margins of my copybooks warranted enrollment elsewhere. Plus, my mother was tired of having to come into school and discuss my behavior with my teachers/nuns. And, while I was very happy to be leaving the confines of Catholic school, I was completely unprepared for scholastic life in a public school setting.

For six years, I knew uniforms. I did not know casual clothes and, even in as awful an era as '89/'90 was for fashion, I walked the hallways a clueless eyesore. In addition, I was ridiculously out of touch with popular music, myself coming from my father's stacks of classic rock vinyl, Headbanger's Ball and soft rock radio, (if you can believe that). NO ONE seemed to be into what I knew or liked, so I had to learn to adapt, which was neither a skill or lesson covered in a Catholic curriculum.  Darwin for a middle school dummy.

Hip-hop had invaded the suburbs by the late 80s/early 90s thanks to the Beastie Boys and Aerosmith. Public Enemy, De La Soul, A Tribe Called Quest, Digital Underground, 3rd Bass, Ice Cube, Big Daddy Kane... These were all names I had not heard nor cared about. Rap music wasn't classic rock or hair metal, so it had no relevance to me as far as I was concerned. But, I was alone in a new school and I had a strong desire to fit in, somehow.

I figured which were the popular Philadelphia radio stations and began listening. On Friday nights, some of these stations would feature a DJ set of spun hip-hop strung together like a club mix. It was a good source of reference, so I would tape the shows and listen to them over and over again. I got a dose of "Welcome To The Terrordome," "Brooklyn-Queens," "Peter Piper," "I'm The Magnificent," "Push It Along" — the shows back then were pretty top notch. But, then again, so was hip-hop. I just didn’t appreciate it at the time. For me, this was all a means of building friendships and that was it.

Anyway, even though I'd managed to find the "good" stuff, I sort of assumed that M.C. Hammer and his "Can't Touch This" popularity, dance moves and enema-shaped pant legs were essential to my education. Please Hammer, Don't Hurt 'Em was listened to quite a bit and I even went so far as to try to learn how to dance to it, just so I could attract some beneficial attention at school dances. I never had the balls to dance in front of anybody, though I'd managed to pity my way into a slow dance or two.

As it turned out, Hammer was viewed as corny, songs like “Pray” and “Yo!! Sweetness” the 4-H Club equivalent to songs like “Jackin’ For Beats” and “Straight Outta Compton.”

So, for me, Please Hammer, Don’t Hurt ‘Em not only emphasized how out of touch I was with my peers, but it also represented some futility in those teenaged years, making me aware, in no uncertain terms, that I was going to be wrong most of the time.

It wasn’t too long, though, that I’d discovered Thrasher Magazine, so all that hopeless and embarrassing pretending eventually changed into a new form of self-involved and angst-laced pretending, which worked out a little better.