- May 26, 2011
Earth is touring in support of their epic and amazing, Angels Of Darkness, Demons Of Light 1. The album was reviewed for No Ripcord.

Interestingly, my NASCAR references were taken by a commenter as a direct stab at the sport when I was actually trying to take characteristically American perceptions, perceptions perpetuated by pop culture and how we’re perceived outside of our own country, and reject some of its credibility by saying, “We’re more than just a media and television propagated culture of arrogance and ignorance.” I guess I didn’t bring that across as well as I hoped in my review so, John, if you happen to be reading this, I have better things to rail against than NASCAR. Jersey Shore, for instance: I would gladly, as you put it, lead a “campaign of persecution” against that. Glenn Beck? Rail worthy. Toddlers & Tiaras? Those are just despicable people that somehow qualify as worthwhile for television so, for the betterment of society, if I can’t save the kids, I’d campaign to pull that shit out of rotation.

Expect a concert review for the June 13th show at Johnny Brenda's.  In the meantime, check out the album if you haven't already, (it's the best I've heard this year... if that claim carries any weight), and maybe catch the band on tour.  All information touring info and links come courtesy of Earsplit PR. 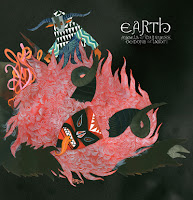 EARTH -- who are about to embark on their next installment of tour dates in support of their Angels Of Darkness, Demons Of Light 1 opus throughout the Midwest and East Coast US in two weeks -- have just confirmed a new full set of West Coast dates for the Summer months as well!

Today EARTH officially unveil eight brand new West Coast shows for July and August, based around their previously-announced performance at Washington's What The Heck? Fest. The new dates will see the band headlining shows in Oregon, California and their home state of Washington, with direct support from Angelo Spencer et Les Hauts Sommets on all dates, and will also include special guests including Wyrd Visions, Whirr and Tiny Vipers on several shows.