- May 06, 2011
Many years ago, a good friend of mine (Thanks, Pierre) had a spell cast upon him by one MF Doom, rap eccentric extraordinaire, the likes of which was large and strong enough that it necessitated an exchange of artistic wealth. In simpler terms, I received two MF Doom care packages in the mail. The first package was a copy of Vaudeville Villain, which was bred by Doom’s alter-ego, Viktor Vaughn. 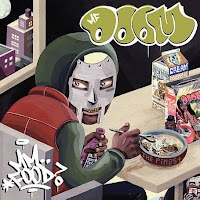 I’m not sure where the alter-ego was necessary as MF Doom’s propensity for comic book “geekery” and lyrical abstraction is alive and well in the observation and flow of Vik Vaughn. Vaudeville Villain, though, was exceptional. The production is what you want out of any hip-hop album: invention and magnetism, an outright hook that draws you in and keeps you engrossed. Doom’s on-point, though monotone, delivery is both sluggish and agile. Somehow he manages to coax the laziest syllables out of his mouth in a very exciting way. It’s paradoxical. I particularly enjoyed “Lickupon”’s usage of Isaac Hayes’ “Walk On By,” which I found more thoughtfully arranged than RZA’s outright appropriation for Wu-Tang’s “I Can’t Go To Sleep.”

The second package was a stack of MF Doom CDs, including the Madlib outing, Madvillian. This was an overwhelming amount of music to get through, and I liked most of it, but I was especially drawn to Mm.. Food, technically MF Doom’s actual follow-up to Operation: Doomsday (1999). “Beef Rapp” was a small obsession and this was because the song revisited a child memory, sampling the score from an old episode of Spider-Man.

Because it had been years since hearing this music, but it was as familiar as something I’d heard the day before, I was struggling to remember its source. I figured it out, eventually. Consequently, MF Doom is a figure of appreciation, a lyrical correspondent to my childhood obsessions, my undeniable nerdy sensibilities and my subconscious refusal to grow the fuck up. Plus, as few hip-hop/rap performers appeal to me these days, Doom reminds me that hip-hop still warrants attention and can still inspire.

I hadn’t listened to Mm.. Food or Vaudeville Villain for years until my interest was rekindled by news of Operation: Doomsday’s custom reissues, one of which is an actual lunchbox and the other is a 4-LP box set modeled after Public Image Ltd.’s Metal Box LP.

You can find info on the reissues at Stones Throw:

Sincerely,
Letters From A Tapehead
00s hip hop reissues to whom it may interest video