Miles Davis: He Loved Him Madly

- May 26, 2011
Today would've been the 85th birthday of Miles Davis and there's no shortage of praise to spare for his extensive catalogue and all the wildly inspirational art that's thankfully been left in his stead.  If we can't have him, at least his music can live on. 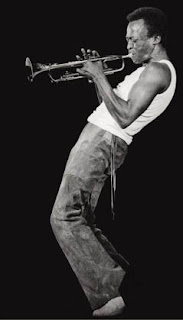 Early in the life of Letters From A Tapehead, I was caught up in a typing frenzy one evening and decided to spend a few hours discussing Davis' Get Up With It, a late period electric/fusion album that I feel gets overlooked.  As far as fusion, Davis' most noted releases are In A Silent Way, Bitches Brew and the controversial On The Corner, which earned Davis somewhat of a smiting at the hands of critics and fans.  But, such is the cost of being ahead of your time, as cliché as that sounds.

Here are my thoughts and praise in regard to Get Up With It.

"He Loved Him Madly" opens Get Up With It as a meditation of sorts on the life and death of Duke Ellington, who'd passed on before the piece was recorded.  Clocking in at thirty-two minutes and change, "He Loved Him Madly" is ponderous, somber and mostly intangible.  Any semblance of rhythm appears maybe twenty or so minutes into the piece, and then you're adrift in its expanse, possibly thoughtful, or maybe bored.  The first time I heard "He Loved Him Madly," I was immediately impatient at its lack of activity.  But, I listened again and again and it soon became one of my favorite Davis compositions.

This being Davis' birthday, "He Loved Him Madly" seemed a good way to contemplate the artist and his contributions which have more than transcended his genre.  Davis is an American icon and he will forever be revered.

"He Loved Him Madly" from Get Up With It (Miles Davis).

I wanted to add some other favorite Davis performances.

"All Blues" from Kind Of Blue (Miles Davis).

"Move" from Birth of the Cool (Denzil Best/John Lewis).

"On the Corner/New York Girl/Thinkin' One Thing and Doin' Another/Vote for Miles" from On The Corner (Miles Davis).

Sincerely,
Letters From A Tapehead
50s 60s 70s jazz legends miles davis rip to whom it may interest