I posted Screen's “Pop Logic” a few months ago, but a video has since been developed. Thusly, I have the right to post it again.  Besides, I like this song.

Screens’ new album, Dead House, was released 5.17 via What Delicate Recordings. All information is courtesy of Terrorbird Media.


Pop Logic from Screens on Vimeo.

Formed in 2009, Brooklyn-based Screens is a post-punk super-group of sorts. Drummer Andrew Becker was a member of Dischord Records Medications; vocalist Breck Brunson - also from DC – was a member of the raw power garage rockers The Apes and keyboardist Daniel Roland Tierney, from San Francisco, played with punk rockers The Mall. Screens sound is a tasty combo of post-punk thrashing with art-rock experimentation. The addition of guitarist Luke Kozikowski only adds to the depth of Screens' sound.


Following countless frenzied shows in the moistest of east coast squats, Screens decamped to the rock and roll mecca of Hockessin, Delaware to record their debut album Dead House which was engineered by Nick Krill (The Spinto Band) who helped craft a spirited mess of unbridled dystopia slathered in a rich, pasty, psychedelic batter.


Screens debut album Dead House is out now On What Delicate Recordings. Head over to Brightest Young Things to read an interview with Andrew Becker about the tracks on Dead House.


For Fans of Oneida, Black Eyes, Parts and Labor and Liars. 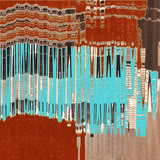