- May 03, 2011
Following last year’s reissue of R.E.M.’s Fables of the Reconstruction for its 25th Anniversary, Lifes Rich Pageant will be getting its turn this July.

Letters From A Tapehead featured a review of the Fables of the Reconstruction reissue, which you can find here.

All information below is courtesy of EMI: 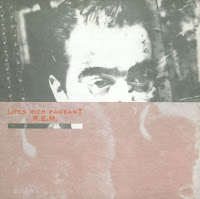 Hollywood, California – May 3, 2011 - R.E.M. has teamed with Capitol/I.R.S. for the July 12 release of an expanded 25th Anniversary 2CD and digital edition of the band’s 1986 album, Lifes Rich Pageant. The new edition features the digitally remastered original album, plus 19 previously unreleased demo recordings cut prior to the album’s studio sessions. The commemorative release also adds new liner notes by music journalist and author Parke Puterbaugh, with the 2CD package presented in a lift-top box with a poster and four postcards. On the same date, the remastered original album will be reissued by Mobile Fidelity on 180-gram vinyl in faithfully replicated LP packaging.

With Lifes Rich Pageant, R.E.M. kicked open the door to a more extroverted future. As Anthony DeCurtis noted in his lead review in Rolling Stone 25 years ago, “Lifes Rich Pageant is the most outward-looking record R.E.M. has made, a worthy companion to the group’s bracing live shows and its earned status as a do-it-yourself and do-it-your-way model for young American bands... For R.E.M., the underground ends here.”

“The Athens Demos,” as R.E.M. has dubbed them, comprise the new edition’s second disc of 19 previously unreleased recordings, including drafts of Pageant’s 12 songs, plus additional demos of songs that were later recorded for other releases. Among them are early versions of “Bad Day,” “Rotary Ten,” “Two Steps Onward,” “Mystery To Me,” “All The Right Friends,” and “March Song (King Of Birds),” an early instrumental version of "King Of Birds" from Document. One track, “Wait,” has never before been officially released by R.E.M. in any form, but it has shown up on bootlegs over the years.