Shopping For Records #52: IMPULSE! — Half a Century in Orange and Black... 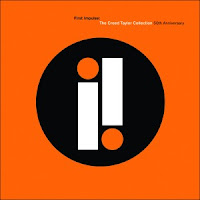 In 2006, I picked up Ashley Kahn’s in-depth book, The House That Trane Built: The Story of Impulse! Records. It was a dangerous book for me to read, simply because the albums, (and there are MANY), spotlighted became essentials for my record collection. As a somewhat economical alternative, or as a temporary teething ring to chew on while I acquired the Impulse! releases I wanted, was the book’s accompanying 4-disc compilation. A single disc version was released as well, but spending money on a paired down colossus wasn’t really an option. Why spend money to get blue-balled? Seemed counterproductive.

For 2011, a 4-disc commemorative box set named for the label’s founder, Creed Taylor, was released in recognition of Impulse! Records’ fiftieth anniversary.

For those of you like me that invested in the Ashley Kahn compilation, you might feel as though the Creed Taylor version is a rehash. However, the Taylor box set is not a cut-n-paste assortment of music. Instead, six of the label’s first releases are compiled, namely J.J. Johnson & Kal Winding’s The Great Kai & J.J., Winding’s The Incredible Kai Winding Trombones, Genius + Soul = Jazz by Ray Charles, Out Of The Cool by The Gil Evans Orchestra, the incredible Blues and the Abstract Truth by Oliver Nelson and Africa/Brass by The John Coltrane Quartet.

There’s a thorough review of the Creed Taylor box set at Okayplayer’s Revivalist site and NPR just reviewed it as well.