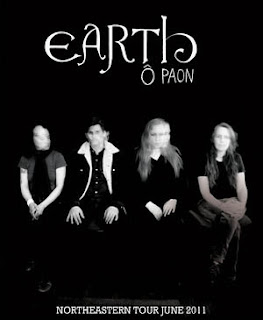 The entire evening was in slow motion.

I pulled into my driveway at about 2AM Monday night/Tuesday morning, obviously lethargic thanks to the long drive home from Philly and the late hour, but also sort of affected by Earth’s performance at Johnny Brenda’s that night. You don’t realize until you see the band play that Dylan Carlson and Co. work very hard at keeping it slow and patient. Watching drummer, Adrienne Davies, visibly hold herself back as she kept pace, I almost wanted Carlson to go against type and speed it up a bit just to lessen the stress you could read across her face and her arms.

You could say that it was a meditative evening, a three-pronged bill pulling both weight and wonder, Earth’s determination preceded by the minimalist Ô Paon and the post-rocking ambience of Philly locals, Cloud Minder. Mind you, traces of second hand herb found its way to my nostrils at points, (some speed toking bake case with a one-hitter standing in front of me), which was incredibly predictable. But, I had to wonder how necessary such accoutrements were in this setting. Three beers into my night, my buzz barely an embryo as far as my body was concerned, the atmosphere Cloud Minder set and built with both skill and sound lust was grand enough for a sober mind, let alone an altered one.

As an opener, Cloud Minder was interestingly the most varied act featured, a post-rock band in the vein of Explosions In The Sky that would get caught up in dissonant ruts that would fill the room with melodic cacophony. Projections of silent war movies, archaeological digs and seagulls added some visual component, but they were almost unnecessary next to what was coming out of the speakers.

Ô Paon, in some ways, was a break for my ears. One lone girl with a guitar and a couple mics, Ô Paon’s stage banter was abundant, but cute. “You can come closer,” she said as she opened her set. “I don’t spit, or bite, or fart, or anything unpleasant.”

She builds loops, her vocal collages and single chord songs in a constant state of evolution as she performs. Songs would eventually emerge, her lyrics French Canadian, her tone some strange marriage of Björk and Merrill Garbus (tUnE-YaRdS). Her outros bordered on overlong, but there was a mood or tone in her music that was captivating. The crowd offered her the benefit of some silence while she sang, though you could at times hear the bar patrons carry on over glasses of the local amber.

She did, though, incite response at one point, noting that she liked how our crowd would say “Yah!” after every song. Naturally, many “Yah!”’s followed much to her amusement.

Watching Ô Paon, though, I did wonder if the ability to build loops in a live setting would eventually result in guitarists not having to sing while playing, an ability not every musician can easily handle. Whether technology has enabled the onset of a dying musical breed or not, Ô Paon had charm and enough haunting nuance to her music that I felt compelled to buy a CD. Unfortunately, she’d sold out of merch, so…

When Carlson and fellow Earth members, (cellist Lori Goldston, touring bassist, Angelina Baldoz and Davies) got on stage, it didn’t really seem to dawn on the crowd until they plugged in.

Carlson, donned in a black leather vest on top of a black button down shirt, his graying beard hooking downward off each side of his jaw like fangs, seemed sort of shy and cautiously worded next to his outward ruggedness.

“Hello, Philadelphia. Good to be back as always.” 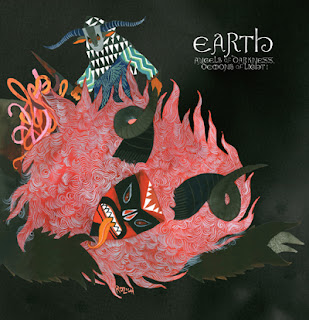 Cellist, Goldston, took on the music’s emotional burden, her eyes either rolled up in an affected gaze or behind her eyelids as she bowed. Carlson kept his eyes fixed on his guitar while the mostly unmoving Baldoz and the exaggerated movement of Davies crafted this onstage rhythm section dichotomy.

At my two o’clock, there was a guy maybe ten feet away from me that spent Earth’s entire set trying to get psyched like his intent was to instigate the world’s slowest and least dangerous circle pit ever. I also caught a girl slow dancing with the balcony’s railing. Otherwise, we either moved slowly to the rhythm like zombies walking in place, or we just stood and watched. Carlson retained a sense of cool with his performance, smooth and steady. Hearing “Father Midnight” from the band’s new album, Angels Of Darkness, Demons Of Light I, was a highlight for me, the song’s sullen though solid edge easily translated for the stage.

Most of their material did revolve around the new album, though they played the title track from The Bees Made Honey In The Lion’s Skull and a surprisingly Americana-styled rendition of “Ourboros Is Broken,” the first song Carlson ever wrote for Earth. There was also a sneak peak at the upcoming Angels Of Darkness follow-up: “We hope you enjoy it. It’s a waltz, so if you like dancing, then go ahead.”

The evening ended with the Angels Of Darkness title track, which allowed the band some space to jam on something shapeless for a little while. After the band thanked us all, the exodus ensued. Spotting Carlson outside gabbing with a fan, I shook his hand before I left and thanked him for the show.