- June 13, 2011
Male Bonding is releasing their 2011 follow-up to Nothing Hurts, Endless Now. From the album is a track called “Bones” that I’m really enjoying. I meant to throw a spotlight on the song last week when all the other blogs and music sources were hyping it up, but I got caught up in my 9-to-5 and just ran out of time. However, a song isn’t going to lose its luster after a few days of online promotion, so here it is.

All information is courtesy of Sub Pop. 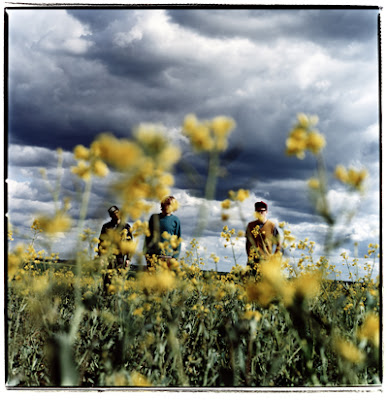 Initial contact with Endless Now triggers a quandary rather like that faced by the wise owl in those old Saturday morning Tootsie Roll Pop commercials: how many listens does it take before you start singing along with these new Male Bonding songs? One time? Two? If you make it to three, you have either a will of iron or an ear of tin. These are eleven selections – plus a wee reprise – imbued with the fierce urgency of now, and catchy as all get-out.

Life has moved at a fast clip for this trio from London's Dalston neighborhood since the 2010 release of their debut album, Nothing Hurts. The rest of the year was filled with relentless touring across Europe and the UK, miles and miles of American blacktop, and a volcano-mandated sojourn in the unfamiliar climes of Los Angeles. A few of the new tunes were written and road-tested during this period. "I wrote the lyrics to 'Carrying' on a flight back from New York  to London, then wrote the music as soon as I got back to my room," recalls guitarist John Arthur Webb. "It has dual citizenship."

As the winter holidays finally arrived, the boys stopped touring—but kept working. "I remember sitting in my room a lot, holding either a cup of tea or a guitar, with the TV on in the background," continues John. "Sometimes I would hold both." Songs poured forth as Christmas came and went. "When we reconvened in the new year we suddenly had more than an album's worth of songs that John brought to us," bassist Kevin Hendrick remembers. They knocked the best of the lot into shape with customary haste, then packed their bags and returned to the United States again.

Endless Now was recorded at Dreamland Recording Studio in Woodstock, NY, the converted 19th century church that birthed such classics as the B-52's "Love Shack" and Dinosaur Jr.'s 1993 full-length Where You Been. Male Bonding took special delight in later learning that Dreamland was also where the 1993 single "'74-'75" by North Carolina jangle-pop ensemble the Connells was made. "We used to come onstage to that song, so it was fate," says drummer Robin Silas Christian. With deep snow everywhere, and sunshine streaming in through the stained glass windows in the morning, the trio worked with producer John Angello (Kurt Vile, Thurston Moore, Dinosaur Jr.) installed behind the altar. After a week in Woodstock they relocated to Headgear Recording in Brooklyn to mix.

"That's the most time we've ever had in a studio," says Kevin of those two weeks. "We exploited every minute of that luxury. We've never had so much time and every single hour of it was filled." Except for the breaks for three family-style meals daily, and a nightcap, and playing with the studio dogs – Ralphie and Artemis – at Dreamland, it was music non-stop. "We were working quickly, all the time."

Musically, Endless Now is everything fans already love about Male Bonding… and much more. "We wanted to push ourselves as much as possible, which is something we've always done, but we did it even more this time," explains Robin. "We used the studio as a tool much more, whereas I don't feel that we did that last time." New timbres like piano, cello, and the Mellotron all factor into the sound, and there are more guitars than ever before. In fact, there are so many overdubs they've had to enlist their pal Nathan Cheetahs to share guitar duties in recent live shows. Another friend loaned Robin a ride cymbal… for the very first time! "I'd never used one before and absolutely loved it. It's all over the record." There are abundant vocal harmonies, the female ones supplied by Frankie Rose of Crystal Stilts/Dum Dum Girls/Vivian Girls renown.

The end result is 36 minutes of songs tailor-made to anchor mix tapes and playlists—if you can stand to separate them from the whole album. The enthusiastic "Tame The Sun" heralds the arrival of Endless Now with the first notes its plucky bass line. And "heralds" is the right word: Male Bonding's music is animated by an infectious, evangelical zeal that reflects their roots in the D.I.Y. indie rock community. "Bones" opens with the giddy rush one associates with classic hardcore or the best of the Wedding Present, then stretches out the same four-chord progression for six minutes and 24 seconds—all the while retaining its succinct air of breathless excitement. With its hazy vocals, hissing cymbals, and just a hint of vintage Beach Boys, the spacey "Can't Dream" reconciles the Punk and the Hippy in all of us. And then there's Male Bonding's take on Phil Spector-style '60s pop, "What's That Scene," which wraps its gritty, grungy center in a sugar-sweet wash of handclaps and wah-ooh backing vocals.

Hear that? You're singing along already.