The Body: Live with the Assembly Of Light Choir... 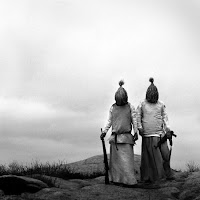 The Body’s All the Waters of the Earth Turn to Blood is an uncomfortable, though at times beautiful, piece of work, one in which the nightmarish and lovely can coexist. As a doom metal/choir ensemble, The Body and the Assembly Of Light Choir went on a 10 date tour, performing their collaborative material from All The Waters... NPR posted footage, which is both entrancing and unsettling.

All below information comes courtesy of Earsplit PR.

Author's note: Due to a vacation and being cut off from the online world, some of the live dates have passed.  Realizing this is a week-old press release, I think you'll still find the live footage worthwhile.  I did.

THE BODY's Full NYC Show With The Assembly Of Light Choir Streaming At NPR; Band To Perform With Harvey Milk, Dark Castle, YOB This Week

NPR recently posted some amazing coverage of THE BODY performing with The Assembly Of Light Choir in both Manhattan and Washington DC on their tour, which crept into ten East Coast cities in late June. Most of the tour featured 13 members of The Assembly Of Light Women's Choir, while the Manhattan performance -- a fully seated event -- featured all 24 members of the choir. The eerie and angelic layers of female vocals harmonizing with the apocalyptic devastation THE BODY duo delivers, was something incredibly unique for all who attended these shows.

At the following locations you can now check out a stream of the full NYC show, and a photo essay of the DC show.

While THE BODY devise their next full-on tour attack for the coming months, they will be performing this week at two local shows. They'll terrorize those in attendance of the Harvey Milk show in New Haven, Connecticut on July 12, and the following night they'll join YOB and Dark Castle's stop on THE BODY's Providence, Rhode Island turf. They're also confirmed to play Raleigh, North Carolina's Hopscotch Fest in September, the massive festival with Swans, Oxbow, Rhys Chatham, Coliseum, Drive-By Truckers, J Mascis, Krallice, Mount Eerie and nearly 150 more artists.