Totimoshi opened for Helmet when the band was in its comeback mode in 2004 with Size Matters.  I dug the band's flirtations with progression, the fact that they were mostly a riff band that would take some strong, though minimal, opportunities to go off the page rhythmically.  Lots of just loud, jazz syncopated sludge.  They were actually a perfect opener for Helmet, a complimentary appetizer.  It only makes sense that Page Hamilton produced some of their albums, though it looks like he's sitting this one out.

Anyway, I'm excited that the band has a new album coming out in August, Avenger.  Check out the information below which comes via the awesome people at Earsplit PR.  Also, check out the live clip of their performance of "Mainline," which appears on the new album.


TOTIMOSHI: Heavy Desert Deathrock Enigmas To Release New Full-Length This August Via At A Loss 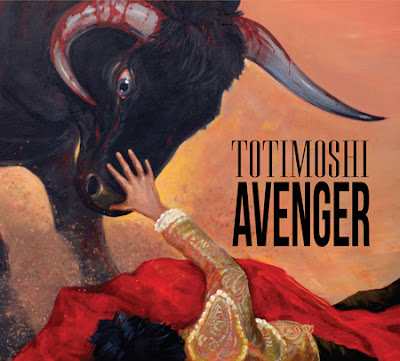 For the past 14 years, TOTIMOSHI -- guitarist/vocalist Antonio Aguilar and bassist/vocalist Meg Castellanos -- have been pounding out its own brand of acid induced rhythmic Hendrix-meets-Dick Dale rock. Born in the high desert of Southern California just 30 minutes from the hometown of Frank Zappa and Captain Beefheart Aguilar, the band's principle songwriter, definitely shares said composers love for adventure in music. Joined by drummer Chris Fugitt in 2008, the trio have carved out a sound all their own. A busy 2010 saw the band tour Europe with Mastodon and Eyehategod and the US with the Melvins and 2001 has already seen the band shake the west coast with Floor.

More an experience than a mere listen, Avenger moves from the title track's progressive heaviness and stories of sadistic intent to the stops and slurs of "Mainline," a heavy blues song gone acid frenzy. Sim's style bass lines weave with Aguilar's guitar style thru "Calling All Curs," then lead the listener to absolute orgasm with "Rose," a song quite simply about fucking. "Rose" is part Billy Gibbons, part James Gang and all TOTIMOSHI. The album's meticulous starts and stops carry the listener through the frenzy of "Opus" to the romanticism of "Leaves" and "Snag." The grand finale comes at track ten with "Waning Divine," a tune about growing old. The song starts in mellow psychedelia and ends in molten metal heaviness. Graced by Brent Hinds and Scott Kelly, this epic truly ends the album with an unforgiving bang.

TOTIMOSHI will be pummeling the masses live, later this summer. Stay tuned for details!