- August 17, 2011
My daughter is full of brain teasers. My wife and I were flung deeply into one not too long ago while my daughter was making a song request. A few weeks ago, my family and I drove to Cape May, New Jersey for a long weekend away.

While my daughter napped, I managed to exercise some authority over the CD player and brandished my road weapon of choice: Rumble! The Best Of Link Wray. At some point while I was playing the CD, my daughter woke up. I expected to be ordered immediately to put something else on, but she listened and found some songs she really liked. 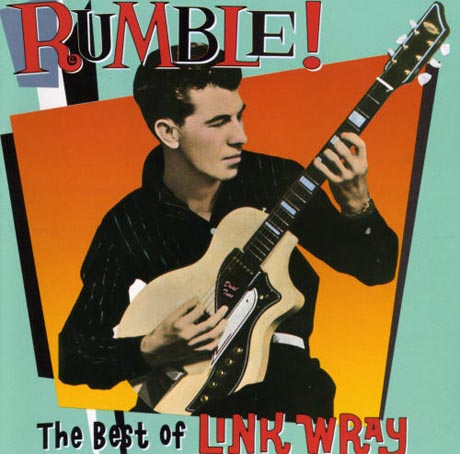 But, Link Wray is best known for instrumentals, so the benefit of having words to cling to in case you need to explain what you want isn’t an option if you don't know a song's title, or you can capably belt out the tune. One song in particular she wanted to hear a lot and, before we figured it out, she referred to it as “Deppa, Deppa, Deppa.” Granted just skipping through the CD was all we had to do to find the track, but she asked us to play it when there was some other CD in the player.

“It’s that music you pwayed that you wike. Deppa, deppa, deppa... with the guitar.”

My wife found the CD and we skipped through until we found “Run Chicken Run.” She exclaimed, “That’s it, daddy!” And, listening to the song, you can hear where she gets “deppa, deppa, deppa,” Wray’s fingers hold against the strings and choke a muted and rusty harmonic out of the strings in three cycles before wringing out a couple pronounced notes. We listened to this song maybe ten times in a row in one day down the shore, so my road weapon of choice had lost some of its luster by the time we were home.

Maybe a week or two after that, we were in the car again on an errand and my daughter makes another odd request: “Daddy, pwease can I hear ‘The Waffing Nose?’” My wife and I looked at each other fucking mortified because neither of us knew what she talking about.

“The Laughing Nose? We don’t know that one.”

This turned into a very surreal back and forth with questions about what the song sounds like and does she know who sings it and when did you hear it and howdowegetouttathisone? exchange of glances between my wife and I. And, then she said, “guitar,” again, and somehow I figured it out:

“Are you talking about ‘The Shadow Knows?’”

So, I pulled out the CD and that was the track. She didn’t remember the “shadow” part, but what child can forget laughter like this?