A Nostalgia Spoon Feed Thirty Years In A Video Daze: MTV Turns Thirty (And We Pretend It Doesn’t Matter) 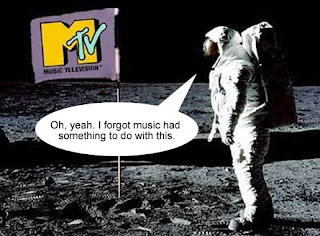 I was born before 1981, before MTV launched, but I don’t really remember life without it. As we’ve recently “celebrated,” (wretched, maybe), the network’s 30th year in existence, I’ve been spending the past couple days in my own head collecting the various MTV memories I’ve accrued. We all have them, don’t we? Weren’t you ever engaged by the channel’s spectacle? Sometimes so taken with the imagery and (even) magic of it all that the music seemed secondary? In some ways, it was. Part of the reason most 70s bands couldn’t survive in the 80s from an integrity perspective was that the climate just became more and more plastic and superficial. Once bands had faces, talent became less important. But, that’s a discussion for another time and it’s an exhausted observation anyway. Let’s stick to the nostalgia.

A kid in a friendly suburban neighborhood where teenagers were prevalent would get exposed to MTV. Van Halen’s “Hot For Teacher,” Twisted Sister’s “We’re Not Gonna Take It,” Huey Lewis & The News’ “This Is It,” Duran Duran’s “Hungry Like The Wolf,” U2's "Pride (In The Name Of Love)," ridiculous visuals or catchy tunes, whatever the basis for memory, I have these songs/videos permanently etched into my grey matter at the possible expense of useful information. The first rap song to penetrate my suburban shelter was Run DMC’s “Walk This Way” followed very closely by the Beastie Boys' "(You Gotta) Fight For Your Right (To Party!)."  Michael Jackson’s “Thriller” scared the shit out of me when I was a kid, that whole yellow wolf-eyed closing left me in nighttime ruin.

And then, as I grew up, MTV bred rituals. Saturday night was Headbanger’s Ball, cause for my brother and I to unroll our sleeping bags onto the living room floor and check out hair metal, because that’s what it was all about when I was 10 or 11. Host of the Ball, Adam Curry, probably should’ve been teaching tennis classes, but we had our eyes glued to the television, checking out Megadeth’s “Peace Sells,” Def Leppard’s “Animal,” Poison’s “Fallen Angel,” Europe’s “The Final Countdown," and Bon Jovi fit in there somewhere, too.  “Welcome to the Jungle” blew us away, Guns N’ Roses emerging as a mostly anti-glam, and sleazy crew that seemed more credible than the Crüe itself.

Puberty hit, girls suddenly mattered (which ruins everything), identity mattered a little more, (but not much more). Clothing became a big deal. MTV responded by giving Kurt Cobain a platform and my world was changed again. Tattered, self-absorbed rock stars became my new diet and Nirvana led the way. In the meantime, while I absorbed as much about the Alternative world as I could via mainstream rock rags and FM radio, shows like Liquid Television and even Beavis & Butthead provided some appreciation for off-kilter ideas, images and humor. As much as one can take Beavis & Butthead for granted now, hearing them ironically comment on the music videos of the era made a few nights during those teenage years enjoyable even though the angst coursed through my veins as strong as the blood.

And, I’d watch these videos, a consumer of music-as-television-data. No different than some web lurker searching for downloads. Intangible media. I’d awkwardly smoke cigarettes in my parents’ house like I was a deep, deep, non-conforming thinker waiting to be enlightened. Sonic Youth’s “Dirty Boots,” Soundgarden’s “Black Hole Sun,” Alice In Chains’ “I Stay Away...” There were some really good songs being promoted then and I remember a lot of them. Many of them led me to the record store. 120 Minutes, Alternative Nation...there were opportunities to enjoy and discover music, even if it was being churned out by a cynically constructed consumer device.

As much as I’d like to, with a straight face, claim that MTV had absolutely no influence on me in terms of the way I heard, digested or thought about music, I can’t. As generations of consumers, all of us are subject to information and commerce in our own specific ways. I was part of a video generation, brought up to see music. And the video still matters, continuing to find receptive eyes and ears through various avenues like YouTube, Vimeo, Vevo...etc. The very idea of a television station devoted to playing music videos is a ludicrous though pioneering notion, which is probably why MTV dropped “music television” from its iconic mark. It worked when it was new, and now MTV is simply around to promote the meaningless exploits of Jersey turds or popularize unwed, pregnant idiots. The most geezer thing I could say is that MTV has, in many ways, done new generations of television viewers a disservice. Granted, MTV is a marketing tool meant to fatten the pockets of the music industry, but it’s had its moments where it managed to send ripples coursing through the dilemma of routine and safety, getting parents in an uproar, maybe even giving teens and young adults a voice (always was a fan of “Choose or Lose”). As a thirty year old, MTV has no nerve, no real interest in its viewership, no importance. It feigns concern with the occasional PSA, but that’s sandwiched between mindlessness, feeding alcohol and rubbers to the worthless individuals its built as pseudo-celebrities just so they can fuck, fight and disgrace themselves for our viewing pleasure. I can’t say that I would be unrolling my sleeping bag for any of this.  Nor, would I be entertaining fond remembrances.

But, I also can’t dismiss the station for having some involvement in my life as a music fan. I’m grateful, but I’m certainly not watching anymore.  After all, "music" is no longer part of the equation.

Sincerely,
Letters From A Tapehead
to whom it may interest video