The Body & Braveyoung: Song One

- September 05, 2011
Experimental tormenters, The Body, toured earlier this year with drone band, Braveyoung.  A clip of their collaborative performance of "Song One," now the obviously titled opener to their upcoming new album, Nothing Passes, was sent along with information regarding the album and tour dates by Earsplit PR. 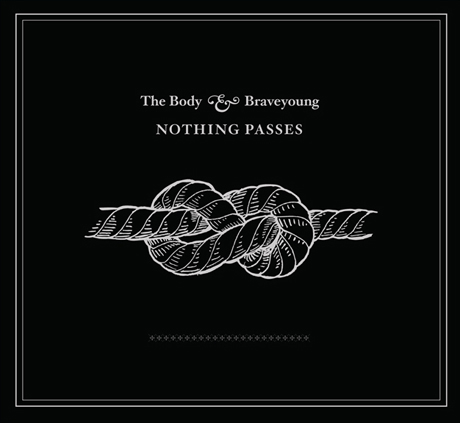 Nothing Passes will be released via At A Loss Recordings.

THE BODY & BRAVEYOUNG:
At A Loss Recordings Confirms Collaborative Album And Tour

With both bands having already performed live together multiple times, including a mini-tour earlier this year where the members of both THE BODY and BRAVEYOUNG performed collaborative material live in several cities of the tour, the time came for the bands to unite their sonic crafts together on tape. After a collaborative recording session at Providence's Machines With Magnets (Battles, Daughters, Lightning Bolt, Chinese Stars) earlier this year, the end result has surfaced as Nothing Passes, a layered but cohesive voyage through cavernous, noise-laden tumult and chaos, ethereal horror-soundtrack creepouts and even serene acoustic passages, exploring new styles for both acts. The album also features vocal contributions from members of The Assembly Of Light Choir who have also previously collaborated live with THE BODY and BRAVEYOUNG, as well as a cover of Exuma's song, The Vision.

At A Loss will release Nothing Passes worldwide on September 27th in CD and digital formats, with the vinyl pressing due early in 2012. View the cover art as well as THE BODY and BRAVEYOUNG performing the first song from the upcoming release, live at Machines With Magnets earlier this year, at this location.

In support of the upcoming release, THE BODY and BRAVEYOUNG are putting the final touches on a month-long tour across our nation. THE BODY kick things off in Brooklyn's Saint Vitus Bar on September 6th, en route to meet up with BRAVEYOUNG in Greensboro, North Carolina to begin their collaborative tour. THE BODY will take a night off from the tour on September 9th to take part in North Carolina's three-day Hopscotch Festival, where they will join Earth, Liturgy and Whatever Brains on stage at King's Barcade, with over 150 additional artists appearing at the massive event. From there the tour will continue clockwise through the South and Southwest, up the West Coast and then back through the Midwest and Southeast.

Stay tuned for more updates on the upcoming collaborative album and tour as it all draws near in the coming weeks.