- September 13, 2011
It's late: a school night for some; work night for others.  A little wired tonight despite zero caffeine since this morning, so I decided I'd spend some time locked in my record room making a mix tape.  It's been CD-Rs lately, so I'm going analog tonight, manual pauses and audio playback, winding tape by hand for cuts, the works.  No real concept, though.  Just stuff I want to hear.  Some of the songs I've chosen have been in mixes before, so maybe I'm not venturing far enough, but...  It's just what I'm in the mood to hear. 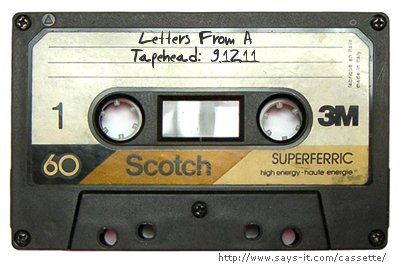 Right now, I'm playing through the 9+ minutes of "Footprints" by Miles Davis, feeling relaxed for the time being.  I don't get to do this nearly as much as I probably should, allotting myself a minute or two to sit down, uninvolved in anything pressing, nary a deadline or obligation in hand.  For a few minutes, I can just breathe deeply and listen.

How many of us get to do this now?  How many of you reading this listen to music in solitude?  I'm thankful for the time I have now, even if the responsible side of me realizes that sleep would be the more sensible option.

Probably going to try and play it back tomorrow just to see how the tape sounds.  I was playing around a bit with the recording level, too, as the CDs and vinyl I used suffer varying definition.

I'm not sure what I'll be doing for the B-side yet, but as it's now past midnight I think a pillow is in order.  It was good to hang out in a here a bit, though, and commune with my stereo.