I’ve been writing about Chicago’s noise-shapers Locrian pretty consistently since 2009’s Drenched Lands. Having said that, every album that the trio has built (members André Foisy, Terence Hannum and Steven Hess) has worked to define the band’s creative and compositional development, their prolificacy allowing for creative and instrumental growth. Whether this clear and well-chaptered transition was intentional or not, from album to album their mastery of noise has been taking less prominence in their work, a significant breakthrough being made earlier this year with their last two-song 7,” “Dort Ist Der Weg” (Popol Vuh cover)/”Frozen In Ash.” The Clearing, their fourth LP in three years, transitions from this point, making it their most developed foray into what could be taken as “traditional composition,” though “tradition” isn’t a word I would normally apply to Locrian. 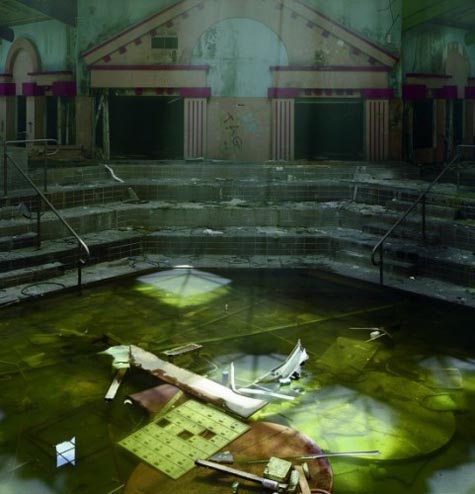 Simply put, Locrian is continuing to merge a more musical approach with their better-established experimental identity, making their sound both as accessible as possible while incorporating more invention into their work. “Chalk Point” is one of the best pieces of music I’ve heard this year, a simple piano melody adding some very distinct humanity to a sound-induced hallucinatory plain of weirdness and impending darkness. A guitar begins to weep, a beat is introduced, the keys flurry, the vocals drone, the effect is compelling.

As a lead off point, “Chalk Point” works to ease listeners in, “Augury in an Evaporating Tower” an industrially-powered piece of John Carpenter/Killing Joke-styled black metal and ambience that brings more of Locrian’s past “scape” conjuring into the conversation. The band will never let go off what makes them unique, “Augury” acting as confirmation of their unwillingness to do so. Even so, the barrage of drum noise and screams are relieved to allow for instrumental guitar soloing, calming the attack and prepping the next song, “Coprolite,” which is an acoustically built instrumental. Charring, crunching sounds wallow in the back as Locrian synthesize some country-tinged acoustical strings with blazing streaks of electrical buzz.

Although attention to notes informs much of what you hear on The Clearing, the title track is the album’s lengthy noise outro, its considerably spare pulse gradually building into swells of shimmering flashes, distant kick drum thuds, minimalist guitar play and faraway screams. The sounds collect, the environs pulsating and screeching, churning and growing. Once the blankets of static begin to fade and then eventually halt, Locrian leave only the thud in its stead, their least composed moment on the album still exhibiting the band’s technical patience, reliance on basic rhythm and the levels to which they can craft an intensified atmosphere. Dig into it and enjoy: there’s no guarantee Locrian will still continue to deliver something of this sort if the band keeps challenging itself.