- January 31, 2012
Swans' Michael Gira has attached his name to a new album from 90s noise band, Chrome Cranks.  Their first new album since 1997's Love In Exile, Ain't No Lies in Blood is currently out.  So, here's a song from the album that will hopefully inspire you to go out, tap your resources and pick it up. 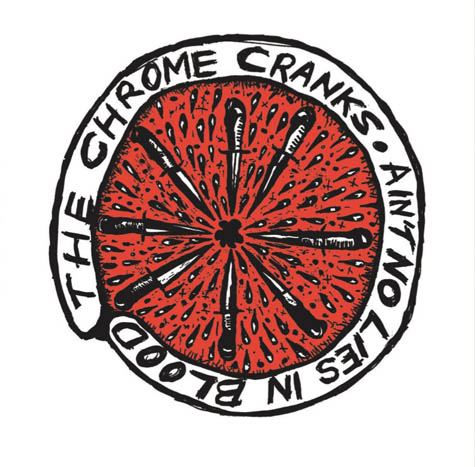 Info comes to you courtesy of Howlin' Wuelf Media.

Since the 2009 reactivation of the classic 1990s lineup of the Chrome Cranks fans have been grinding their teeth for a new album of the influential New York band's volatile, high-octane blasts. In these chokingly bleak, post-ironic times there simply aren't any other acts out there like the Cranks, who play unapologetically confrontational, utterly incendiary rock 'n' roll like they mean it with every poisoned pore. Like few bands before or since, the foursome-singer/guitarist Peter Aaron, guitarist William G. Weber, drummer Bob Bert, and bassist Jerry Teel-simultaneously embraces and destroys rock's very traditions. But finally this soft, pain-deserving world has something new to choke on: Ain't No Lies in Blood, the first album of new Chrome Cranks material since 1997, which is out now on Thick Syrup Records (CD) and Bang! Records (LP).

Cut and mixed in three blistering days with producer Kevin McMahon (Walkmen, Swans, Titus Andronicus) in Upstate New York, Ain't No Lies in Blood is the eighth album in the Cranks' nearly 25-year history-and their hardest, noisiest, heaviest, and nastiest by far. In keeping with the band's earlier oeuvre, it's another swirling hell of dark, raw, distorted blues-based squalls; hypnotic, labyrinthine detours through primordial swampland; and searing flashes of deep, torchy drama. This release, however, strips the outfit's minimal, no-bullshit M.O. even farther down, to its most savage and primal essence. There's the locomotive, open-wounded wail of "I'm Trash," which flattens all in its path and hints at early '80s hardcore angst, and "Rubber Rat," a screaming, stomping mess of bony, cartilage-cracking fists. Three radically remade covers include an epic trawl through the Byrds' "Lover of the Bayou," and of course the Cranks' trademark murky 'n' moody side is present in all its black, jagged glory: Check the swaggering decadence of "Let it Ring" and "Star to Star."
"[The Chrome Cranks] had me screaming with joy," says Swans/Angels of Light front man Michael Gira, who witnessed the reunited band's return show in 2009 and later drew the demonic cover art for Ain't No Lies in Blood. "I almost threw my beer at them, I was so happy."

Formed by Aaron and Weber (G.G. Allin's Murder Junkies) in Cincinnati, Ohio, in the late '80s, the Chrome Cranks moved to New York in 1992 and acquired Teel (Honeymoon Killers) and, eventually, Bert (Sonic Youth, Pussy Galore). The quartet's explosive sound, capped with Aaron's paint-scraping voice and feral stage persona, quickly saw the Cranks rise to the top of the Lower East Side trash heap. After a split EP with Foetus, the band's eponymous debut on PCP Entertainment arrived in 1994; Dead Cool (Crypt Records, 1995) and Love in Exile (1997, PCP Entertainment) followed, as well as several live and archival releases. The outfit toured Europe, the US, and Canada incessantly and appeared on MTV before splitting in 1998, leaving deep marks on future members of the White Stripes, Mooney Suzuki, and other acts who've cited the Cranks as an influence. The group reunited for shows in the US and Europe in 2009 and 2010.
"This is music that could have popped up in any bar over the last forty years, give or take a few squeals," writes the New Yorker's Sasha Frere-Jones. "If you aren't particularly interested in this year's most unusual trend and want to cut to the chase, the Chrome Cranks will be there, grinding away at their Platonic ideal of rock 'n' roll."

A horrifically powerful record, Ain't No Lies in Blood shows that for the Chrome Cranks mellowing with age is simply not an option. Back to the grind!