Virus: The Agent That Shapes the Desert/The Black Flux (Geeking Out on Metal Albums One Fine Evening.)

- January 06, 2012
As the wonderful web has granted humanity the gift of impersonal and sheltered interaction, it’s also allowed our worlds to grow exponentially from a virtual standpoint. Online communities are plentiful, your various interests shared and cultivated by message boards, social media, webzines, blogs and a multitude of other opportunities to either enlighten or burden others with your opinions. Record junkies, a geek demographic underrepresented by the self-serving commercialism of the music industry, (an industry that still subsists upon the hard-earned green shelled out by this demographic), has benefitted from this worldwide connectedness, allowed to converse and debate, review and snub, publicly promote as well as denounce. 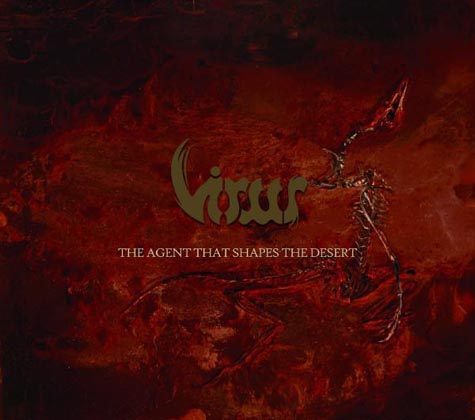 But, as FM radio, MTV and Top 40 have always been the easily manipulated tastemakers for mainstream “don’t give a shit about music” America, the Internet has a tendency to be pushed in certain directions as well, adoration a flag continually staked into the evergreen and plentiful soil sprouting a wealth of bubblegum laced billboards that look good in jeans and pitch soda while pitch-corrected. So, even with depth and availability of independent music online and the limitless capabilities of finding new, odd or underground music, the powers that be are still the powers that be. That being the case, record stores and friends with common interests remain your best chance of keeping up with the good stuff. They got your back.

Being one to enjoy an occasional geeking sessions, I was invited to a friend’s house a couple months ago and, through his enviable treasure trove, found Virus.

Virus is an avant-garde metal band from Norway, broken, dissonant chords, heavy bass rhythms, droning and melodic vocals and very strange transitions. I was exposed to songs from their 2011 release, The Agent The Shapes The Desert and their 2008 release, The Black Flux. Some incredible stuff. A revelation of this caliber is what you hope to gain from interactions with fellow music enthusiasts, along with the hope that you yourself can impart the same sort of wisdom.

Sincerely,
Letters From A Tapehead
experimental metal to whom it may interest

Anonymous said…
I've been a fan of Virus for years now, and it's always great to introduce a music fan to their unique brand of strange songcraft. Some can't quite handle the dissonant jangling chords and the eerie crooning vocals, but for those of us with weirder tastes it's obvious that these guys are on a different level entirely from most of the stuff floating around out there.
5/31/2012 10:20 PM