When I discovered Henry Rollins, I was a freshman in high school. My version of this time in my life wasn’t full of wide-eyed teenage wonder or endless nights glorifying in my pubescent freedom, chasing the opposite sex while gleefully unattached to job or responsibility. In fact, when any adult told me that high school was the best time of their lives, I didn’t understand how that was possible. I was two years into the public school system, still incredibly insecure and unsure of myself and where I fit. Without getting into too much detail, home really didn’t provide any safety net or sanctuary. I had friends but wasn’t really in a position to see them too often. So, between home and school, which was all there was, I remember feeling very alone.

Now, every teenager goes through a period of feeling misunderstood. Your parents and other the adults in your life aren’t supposed to “get” you, right? Isn’t that what Will Smith said? “Parents just don’t understand?” Parents are meant to view all you do as stupid and all your interests as distractions from the grand scheme. This is, after all, how their parents treated them, and so on and so on.  I felt particularly misunderstood due to circumstances I'd rather not detail, so I found much of my solace through my headphones.  Most of those visceral moments one experiences during those days as a hell raiser, most memorable are my musical epiphanies.

Nirvana happened around this time and my interest in music escalated. With that and a new fascination with skateboarding, which was still a relatively exclusive culture at the time, I felt somewhat certain about a new phase in my developmental identity. Art related to both music and skating, and the only outlet I had at the time was drawing. Seemed the way to go. It was through this world that I found the Dead Kennedys and then learned of Black Flag, though Rollins Band got to me first.

I was beginning to network musically through cassettes, so buying blanks became essential. Through this I procured a copy of Rollins Band’s Life Time. I had an embarrassingly limited knowledge of punk rock music, and no real idea as to who Henry Rollins was. But, the tape saw endless repeats and set me on this path of devotion that’s remained strongly significant for me over the last twenty years. A dubbed copy of Hard Volume followed soon after, which had me entrenched into a fuller and more emotionally charged musical netherworld I’d yet had the ability to compute, its music more complex and intense than I could fully comprehend. Transfixed by songs like “Gun In Mouth Blues,” “Lonely,” “Turned Inside Out,” “Down And Away...” songs that unleashed a soul under pressure, an angry tortured mass of jazz-informed hardcore frustration. Rollins Band weren’t as audibly loud as a typical metal band, but equal in terms of strength and sonic violence, which itself was kept as this pent-up specter which would taunt my ears till Rollins would explode in a series of heightened screams amidst the band’s insane, amplified meltdown. They affected me like no other band had at the time, their music powerful enough to make me feel both elated and darkly pensive.

It happened to be 1992 when Rollins Band released The End Of Silence, their first album from a major label. Benefitting from the Alternative explosion and the first Lollapolooza tour, Rollins Band began to get more notice via MTV and the more open-minded mainstream that was looking to cash in. I’d only been a fan for a few months. If my life hadn’t already been altered by Rollins beforehand, The End Of Silence was my point of no return.

Without getting into the whole “life” end of things, we’ll say that I had a fairly large chunk of my teenage years to get through before things got any better. With that in mind, The End Of Silence became my pep talk, a sturdy blues-metal rock jam that presented all the worst case scenarios before summarizing the solutions: “If you could see the you that I see/When I see you seein’ me/You’d see yourself so differently/Believe me,” “You’ve gotta keep your self-respect,” “Deal with it.” I needed to hear that. As small a world as one lives at 15 years old, hearing Rollins run through the day-to-day, presenting relatable cases where one questions life, (or one decides to end it), I needed to hear that this was not the only gig, that there was more out there and that whatever I couldn’t change in the now I could at least fix for the future. I’d gotten more mileage out of The End Of Silence than any album I’d listened to up to that point, and that's probably still the case. 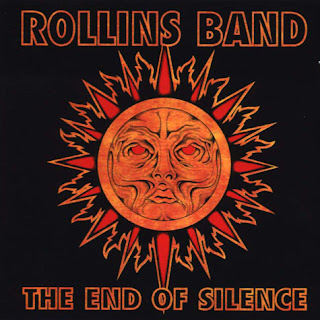 Songs like “Obscene,” “Almost Real,” and “Just Like You” still turn my blood to ice. Yes, Rollins Band was all about the voice, but there was also an amazing band backing him up, one capable of syncopated King Crimson-influenced progressive rhythms, or Sabbath-based sludge; harrowing percussion on the level of Neurosis and bass quakes that would level a small village.  At their prime, Rollins Band's Chris Haskett, Andrew Weiss, Sim Cain and Theo Van Rock were unmatched by many.  While those first couple albums had the underground push of unbridled fury and an avalanche of abrasive guitar work, The End Of Silence had a gleam to it that allowed every element its time in the spotlight. Even though songs like “Tearing” and “Low Self-Opinion” were easy to market as hits to the Alterna-crowd, something like “Blues Jam” was a tough sell. You can say the album was accessible, but you still got the shrieks and the mindless onslaughts of sound. The album ends (“My blood’s not my blood”) as if ready to pull off its own skin, a shroud of shame being torn from a defiled being so it could proceed and reconcile its own adversity with dignity.

Rollins Band arrived when I needed them. In 1993, I finally saw them perform at The Trocadero in Center City Philadelphia. Bassist Andrew Weiss had been fired from the band, so his replacement, Melvin Gibbs, played that night. All the band’s material was new, so I hadn’t heard a single song as their TEOS follow-up, Weight, (the one with the hit), had yet to release. But still, the night was magic. Rollins walked out, mic in hand.  The music began with a wave of his arm and us, the sea of faces, pushed forward. I haven’t looked back since.

Thank you, Henry. And Happy Birthday.

henry rollins rollins band to whom it may interest