- February 09, 2012
February 21st will see the release of the Locrian/Mamiffer (Aaron Turner of Isis and his wife, Faith Coloccia) collaboration, Bless Them That Curse You.  Expect a review of the album in the coming weeks.  In the meantime, check out details of the album and sample its first online enticement, "In Fulminic Blaze." 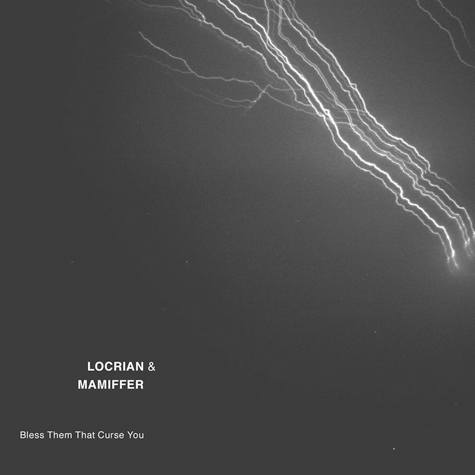 SALES POINTS:
• Limited to 550 copies, packaged in deluxe LP fold out designed by Faith Coloccia with hand stamped labels .
• A studio collaboration between Mamiffer and Locrian, recorded by Greg Norman at Electrical Audio in Chicago, and mixed by Randall Dunn (Earth, Jesse Sykes, Wolves In The Throne Room, etc.).
• A co-release between SIGE and Utech Records. CD version being released by Profound Lore, cassette version by SIGE/Land of Decay.
• Locrian and Mamiffer have released previous recordings with labels such as Small Doses, Utech, Hydra Head, Conspiracy, Land of Decay, etc.
• Mamiffer and Locrian have and are collaborating with artists such as Horseback, Merzbow, Daniel Menche, Chistoph Heemann, Eyvind Kang, etc.

SELECTED QUOTES:
“Plenty of bands play music that sounds dark, but few can make every note bleed black and breathe smoke. Count Locrian as part of that select circle. Something about the Chicago trio’s sound is inherently ominous-- it’s hard to imagine them playing “Chopsticks” without turning it into an earth-threatening thunderstorm.”
-Pitchfork
“Once or twice a year an instant classic is released of epic proportions. No question, Locrian’s The Crystal World was pretty much a lone challenger for 2010. ... (a) triumph of avant metal.”
-Foxy Digitalis
“The vast eternities of (Mamiffer’s) Mare Decendrii are like some oft-melodik yet ambient post-Doom take on Popol Vuh, issuing forth a massive sonic ritual music by house sized trolls of a variety that occasionally approaches the portentous stenorian processions of Queen Elizabeth. ”
- Julian Cope
“Mamiffer’s “Mare Decendrii” is the latest release from pianist/vocalist Faith Coloccia + friends and labelmates from Hydra Head, and it has officially floored me and left me cowering in the depths of my closet.” - 9/10
-Foxy Digitalis
Bless Them That Curse You captures an unprecedented balance of claustrophobia and solace. It’s a strange alchemy to render something both inviting and alienating; it requires a special kind of skill to create music that sounds like it’s rattling apart at its seams, unraveling in a torturous but compelling fashion. It demands an acknowledgement of the fine line between noise and racket, between tension and tedium. Finding an interpersonal chemistry to pull it off can take years of searching and refinement. Initiated by a history of record swapping and mutual admiration, Chicago’s Locrian and Seattle’s Mamiffer managed to accomplish such a feat.

Since their inception in 2005, Locrian’s sound has thrived on harnessing emotional resonance through texture and space. Highlighting a specific melody or beat in their music is unnecessary; their ability to trigger unease, fear, despair, and paranoia by playing with dynamics in timbre and timing is the central fixture in their work. While the Chicago-based trio’s approach is certainly unorthodox, they are not without sonic peers. Seattle-based duo Mamiffer similarly explores new territories in sound by marrying fragmented elements of neoclassical, drone, and proto-industrial dirge into compositions that are beguiling, haunting, and occasionally violent. Originating as a solo project for pianist Faith Coloccia in 2007, the project grew to encompass husband Aaron Turner and a rotating cast of guest musicians. Coloccia’s work, by nature, is malleable and suited towards the collaborative process.

The collaboration between the two groups yielded some of the most beautiful material Locrian has ever recorded, and inversely pushed Mamiffer into the most caustic of new territories. Composed and recorded in Chicago at the renowned Electrical Audio studio, the album is the result of two disparate approaches arriving at one cohesive voice. It’s at turns contemplative and reserved, unnerving and unsettling, thunderous and feral. Aided by the engineering prowess of Greg Norman, the mixing skill of Randall Dunn, and the auxiliary instrumentation of Alex Barnett (Oakeater) and Brian Cook (Russian Circles), Bless Them That Curse You is a richly textured study in an unconventional creative process, blending fine-tuned synchronicity with spontaneous brute force.
SIGE RECORDS VASHON, WA